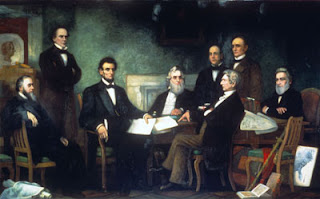 I hadn't realized we had been going at it for over one year now.  Our anniversary was May 5.  We started with Team of Rivals, and have logged over 240 posts and countless comments since then.  Thanks very much for all of your participation!
Posted by James Ferguson at 5:35 PM 9 comments: 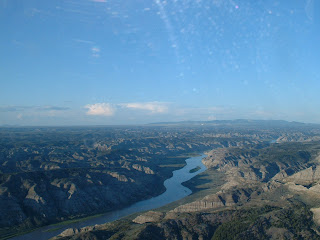 The Year Before the Flood 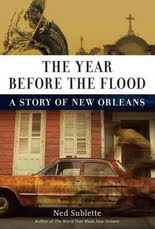 Heading out for a long weekend, and thought I would leave you all with this title, The Year Before the Flood: A Story of New Orleans, which sounds like a spirited history of the Crescent City.

Welcome to the fold, Carol : )
Posted by James Ferguson at 10:44 AM No comments:

After six or so tries I finally managed to become a contributor (in name only, still; this doesn't count). Thanks for asking me in. IMO (never h), the group is most distinguished.
Posted by Carol at 9:20 PM 1 comment: 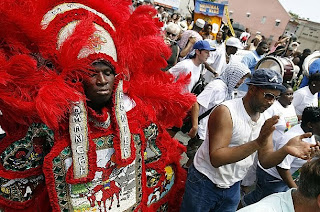 One of the more interesting aspects of Treme has been the focus on the Mardi Gras Indians, an indelible image of New Orleans.  I found this brief history on the Indians, and you can't beat Dr. John's version of My Indian Red.
Posted by James Ferguson at 9:01 AM No comments: 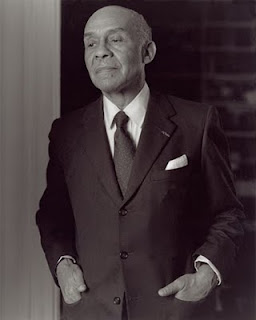 So now we have Juneteenth, the novel that Ellison's executor, John Callahan, has ably quarried from that mountain. The book is more than Ellison fans could expect, yet less than Ellison probably hoped--an ambivalent masterpiece. It celebrates the promise of interracial love even as it cannot square its black and white points-of-view. It flares with stylistic pyrotechnics--passages that match Invisible Man for energy--even as its plot feels unfinished and its monologues too windy. Perhaps most strikingly, Juneteenth aims to speak to our current racial dilemmas even as it harkens to an age before "the inner city," "black power," and the "underclass." It is easy to see why Ellison could not wrap up his epic: the novel revolves in an intelligence too complex and too quick, ironically, to come to completion. As his Invisible Man might say, Ellison was trapped in a groove of history.
Posted by James Ferguson at 11:16 AM 2 comments:

Gintaras et al.,
Thanks for inviting me to join your discussions. I have been reading the posts and I am very impressed. I am still a Professor at Macquarie University although I have cut back the undergraduate teaching to concentrate on Research. Currently I have two books under way:
1. A study of the first ever university- level Australian History Course in the world- Stanford in 1907-8
2. A book called A REBELLIOUS SOLDIERY AND A RAPACIOUS PEASANTRY? Australians and the French 1916-1920.
I have ambitions to write a biography of TW Stanford who lived in Melbourne for much of his life-spiritualism, art, entrepreneurship... We will see!
Posted by George Parsons at 10:17 AM 11 comments: 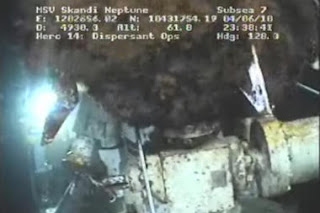 Obama plans a fourth trip to the Gulf Coast before making a speech from the Oval Office outlining the position of the White House on the BP oil spill.  News has gotten grimmer and grimmer these past weeks, as the volume of oil spewing out of the Deep Horizon well is now estimated at over a million gallons per day,  based on new spillcam observations, making it by far the worst oil spill in US history.

The President appears to be bearing the brunt of criticism, as Gulf Coast governors question his leadership and coordination efforts.  The same governors who wanted no part of the federal stimulus bill or national health care.

Meanwhile, BP stocks continue to tumble with revelations of much more oil spilling out of the well head than previously thought, along with very high quantities of methane gas that threaten the invaluable food chain in the Gulf of Mexico.
Posted by James Ferguson at 2:18 PM 5 comments:

Some of the writing and suggestions for books from the linked Times article are a little too precious to believe, but Portis' The Dog of the South sounds like it might be fun. I didn't realize he had written so many novels: It has gotten a whole lot uglier since this Reuters aerial photograph, as BP and company are no closer to capping their oil well than they were 6 weeks ago, with the only real solution at this point being a relief well that is still 2 months off.  The spill now exceeds that of the Exxon Valdez spill 20 years ago, and probably will surpass that of the oil Saddam unleashed on the Persian Gulf back in 1991.
Posted by James Ferguson at 9:29 AM 41 comments: