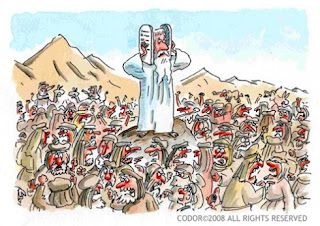 It seems we began a third "Awakening" around 1954, leading to the revamp of the pledge of allegiance to include "One Nation Under God" and "In God We Trust" being stamped on our currency, which Eisenhower approved during his administration.  This religious fervor didn't disappear during the 60s, as James Patterson noted in Grand Expectations.  America remained a deeply religious and conservative country for the most part, resulting in a great number of bloody battles and deaths over Civil Rights and the Women's Movement.  We saw movies like The Ten Commandments and The Greatest Story Ever Told during this time, both of which were big hits at the theater, and both were nominated for numerous Oscars.  Jesus Christ Superstar offered a counter balance, but is remembered more for its soundtrack than its images.

Billy Graham had been pastor to the presidents ever since Eisenhower, and Reagan brought Jerry Falwell into the mix in the 80s, greatly politicizing religion, which now appears to be the cornerstone of the Republican party, and the Tea party in particular.  Mel Gibson's film The Passion struck a deep chord with religious conservatives, and seems to have been the inspiration for Kirk Cameron's recent religious pilgrimage in Monumental.  Both directors strongly advocate a deeper role of religion in politics.

What makes this recent "documentary" by Cameron worth noting is the revisionary tale he presents of the Pilgrims and the attempt once again to make the Founding Fathers appear as high priests, rather than the secular leaders they were.  It looks to be a monumental dud.  However, it fits with the aim of the current religious conservative movement is to rewrite American history to suit its fundamental religious view of the world.  I well imagine they would like to rewrite the Constitution, interspersing "One Nation Under God" and "In God We Trust" throughout the articles and amendments, as there is only one reference to religion found throughout the entire text.
Posted by James Ferguson at 10:29 AM 2 comments: 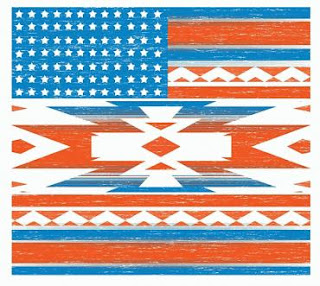 This sounds like a very good new book on Rez Life by David Treuer, who wrote a series of rez sketches for Slate magazine a few years back.  More and more books and movies are coming out on contemporary life on the 300+ Indian reservations spread around the country.  One of my favorite films is Smoke Signals by Chris Eyre.  On a fun note, here are the Raiders singing Indian Reservation, one of my favorite songs from the 70s.
Posted by James Ferguson at 8:49 AM 1 comment:

Any Brautigan Fans Out There? 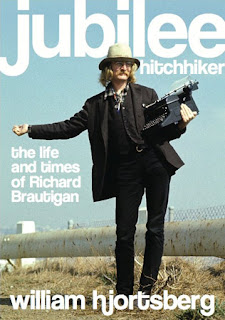 This book is getting rave pre-pub reviews (starred review in Booklist).
Posted by avrds at 3:00 AM 21 comments: 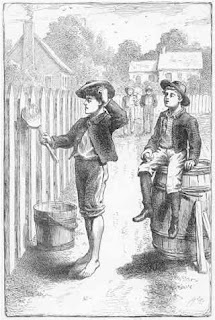 I find myself reading The Adventures of Tom Sawyer with my youngest daughter.  She reads in Lithuanian while I follow along in English, helping make sense of the many colloquial expressions and superstitions that abound in this marvelous book.  My daughter's copy actually has facsimiles of the original illustrations.  Mine is combined with Huckleberry Finn in the rather plain Everyman's Library edition.

I had forgotten so much of the story over the years, like Joe Harper tagging along with Tom and Huck when they decided to abandon St. Petersburg and become "pirates."  Huck doesn't really come into his own until the second book, which to me is the better book.

Twain draws quite a bit from the relationship between Tom and Becky Thatcher.  It was funny to read that Vera Nabokov was dead set against young Dmitri reading Tom Sawyer, because of Tom's infatuation with Becky.  She felt this was too early to be showing such affection.

Tom Sawyer has been translated into many, many languages, and even a 1936 Soviet film.  I guess that boyhood anarchist spirit appealed to Stalin.
Posted by James Ferguson at 2:56 PM 9 comments: 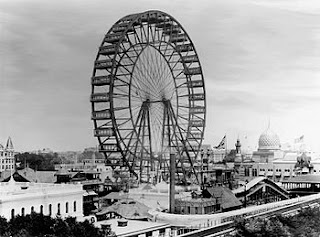 Chicago's World Fair in 1892 marked the 400th anniversary of Columbus "discovering" America.  It was hailed more for the technological marvels on display than its architecture, but here is a catalog of the exhibit, entitled Official Views of the World's Columbian Exposition.  Quite a few other catalogs out there as well, along with a handful of historical novels, including this one by John Glavin entitled Trapped on the Wheel.  That's a pretty impressive Ferris Wheel for any age!
Posted by James Ferguson at 12:21 PM 8 comments: 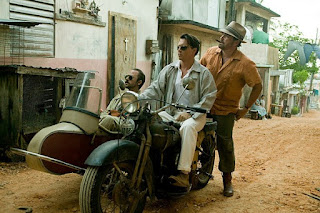 I watched The Rum Diary the other night.  I knew not to expect much given the book was almost universally panned when it was released long after the fact in 1998.  I thought Depp, who seems to have become the executor of the Hunter S. Thompson estate, or at least his posthumous spokesman, might do something with it, but it seems he and director Bruce Robinson pretty much played this one by the book.

The story owes more to Men's Adventure magazines than it does Rime of the Ancient Mariner, which "Paul Kemp" constantly alludes to.  The time was apparently before Thomspon got heavy into drugs.  He relied mostly on highly fortified rum to carry him through the day, "pressed" by the wild-eyed Moberg, played to great comic effect by Giovanni Ribisi, but at the tail end of the movie we get a drug that appears like LSD in the form of eye drops.

Puerto Rico is presented pretty much as one big real estate scam with ex pats spending their time bowling or lolling around on the beaches.  The locals are portrayed as smarmy real estate developers, corrupt officials, wild-eyed natives and voodoo queens.  The story doesn't go much beyond snapshots until we meet up with some former Pentagon type who has the inside tract on a piece of government real estate up for grabs.

This was supposed to be Thompson's Great Puerto Rican Novel, but it seems he couldn't find a publisher for it till long after he penned it during those balmy days of 1959.  With all the political intrigue going on at the time, you would think a young Gonzo would have found more in the Caribbean than this tepid tale of bowling, rum and shady real estate developers.  I give this one a C-.
Posted by James Ferguson at 12:40 PM 10 comments:

The Battle over the New Deal 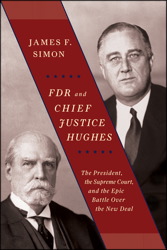 Another book I would like to read,  FDR and Chief Justice Hughes.  Here's a review from CSMonitor.
Posted by James Ferguson at 3:10 PM 20 comments: 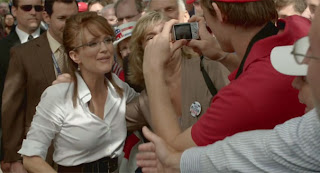 It all seems rather quaint now with Mackie reduced once again to a crusty old Senator in Congress and Palin trying to stir up some interest for a "maverick" bid at the nomination at the GOP convention this August. Heilemann and Halperin's account of the 2008 campaign appeared written for the screen, and HBO gladly obliged, casting Ed Harris and Julianne Moore (two Hollywood liberals) in the lead roles, yet getting them to play their characters by the numbers so as to give the sense of an unvarnished account. As this Esquire review notes, it is played a bit too straight up, not so much taking you behind the scenes as presenting the tactics and many of the same myths that were part of the campaign.
Posted by James Ferguson at 12:37 PM 11 comments:

It is too bad we don't have journalists like Edward R. Murrow any more, who aren't afraid to go after demagogues and tackle the big issues.
Posted by James Ferguson at 9:45 AM No comments: 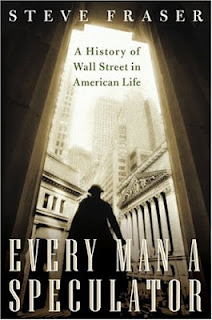 I bought this book a few years back but never got around to reading to it.  Maybe I should in honor of the founding of the New York Stock Exchange.

RY a multiple choice question. Which phrase best describes Wall Street: (a) a den of thieves; (b) the engine room of innovation; (c) a conspiracy of oligarchs; (d) Babylon on the Hudson (e) the yellow brick road to a property-owning democracy?
In his rollicking history over two centuries, Steve Fraser nominates all of the above. He is notably assiduous. He plots the roller coasters of boom and bust from the panics of 1792, 1837, 1873 and 1893, through the Jazz Age and the Great Depression to the ''socially negligent and narcissistic'' second Gilded Age of the Reagan 80's and on to today's ''shareholder nation.''
Posted by James Ferguson at 10:32 AM No comments: 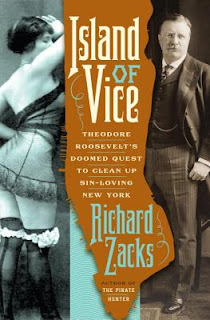 Quite a cottage industry revolving around books on Teddy Roosevelt.  Surprised Jay Parini hasn't taken a shot at Teddy, especially since he was a famous author too.  Here is the latest installment, Island of Vice, which has received rave reviews,


“Here is young Teddy Roosevelt as the reformist New York City Police Commissioner  confronted in 1895 with a cabal of  unaccountably wealthy police officials, whole neighborhoods of brothels, and the paws of the Tammany Tiger in everything. A delicious municipal history, impeccably researched, excitingly told.”
--E. L. Doctorow, award-winning author of Ragtime

You gotta love the cover!  But, I don't think prostitutes were his biggest problem.
Posted by James Ferguson at 12:20 PM 1 comment: 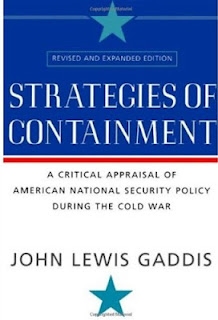 With all the bellicose words coming out of Congress and on the campaign trail regarding Syria and Iran,  I"m reminded of the decades we got by on Strategies of Containment and efforts at detente with long standing enemies.  But, here is Netanyahu trying to drag the US into a war with Iran, despite advice to the contrary by his military advisers back in Israel, and Republican senators and presidential wannabes all too eager to engage in yet another "Holy War."
Posted by James Ferguson at 9:01 AM 24 comments:

Whale of a tale 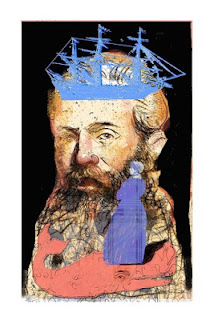 I hadn't noticed before that Jay Parini took a stab at Melville in The Passages of H.M.: A Novel of Herman Melville.  It is not a very inspiring title but this review sounds quite promising,

"The Passages of H.M." takes a two-pronged approach to Melville's life, interleaving the highly subjective, not always reliable, first-person perspective of his long-suffering wife, Lizzie Shaw Melville, with that of a third-person, omniscient account of Melville's adventures in his early adulthood as a seaman on various merchant and whaling ships, his literary aspirations and struggles, and his downtrodden years spent trudging through the streets of New York as a customs inspector.


The "perspective" sounds very similar to The Last Station about Tolstoy.   I suppose we have another movie in the mix?
Posted by James Ferguson at 11:31 AM 6 comments: 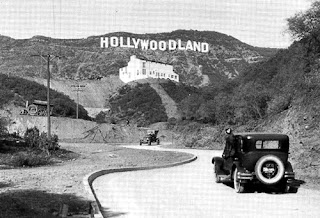 Watching The Artist the other night made me think that the character was a cross between Rudolph Valentino and Douglas Fairbanks Sr.  Technically, it was a joy to watch but the movie struck me as a bit hollow in the end, as it was one cliche scene after another, right down to the final dancing sequence a la Astaire and Rogers.

A lot of debate here over the director Michel Havanavicius' Lithuanian roots.  The name couldn't be any more Lithuanian.  His family was part of the Jewish diaspora, given what little biographical information I have found on him.  Litvaks are spread far and wide, and every year meet up in Druskininkai for the annual Limmud.

Anyway, the movie had me drifting back in my imagination to the Silent Era with such films as The General and The Thief of Baghdad.  I keep meaning to read Gore Vidal's Hollywood.
Posted by James Ferguson at 3:08 PM 4 comments: 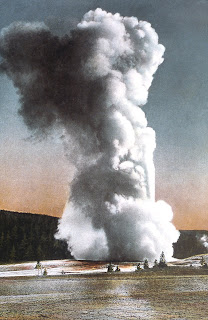 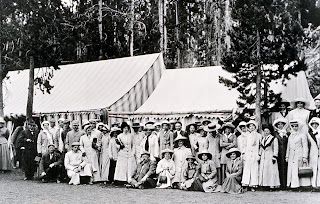