A Religious History of the American Civil War 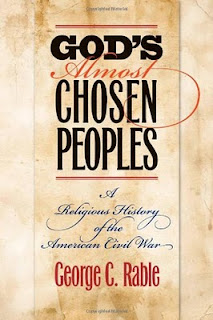 Examining a wide range of published and unpublished documents--including sermons, official statements from various churches, denominational papers and periodicals, and letters, diaries, and newspaper articles--Rable illuminates the broad role of religion during the Civil War, giving attention to often-neglected groups such as Mormons, Catholics, blacks, and people from the Trans-Mississippi region. The book underscores religion's presence in the everyday lives of Americans north and south struggling to understand the meaning of the conflict, from the tragedy of individual death to victory and defeat in battle and even the ultimate outcome of the war.

Here is a google copy, I imagine to the chagrin of George Rable.
Posted by James Ferguson at 11:32 AM