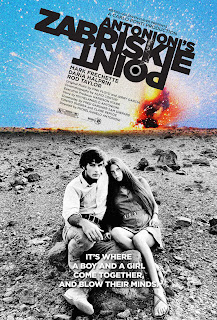 A couple of films from the late 60s come to mind, If ... and Zabriskie Point.  One was set in an English boarding school and the other in the deserts of California and Arizona.  Both dealt with upper middle class disaffected kids looking to stir up some action, mostly out of boredom, as no core set of beliefs was set in either film.

Interesting that Lindsay Anderson, who directed If..., was a big fan of John Ford, although one would be pretty hard pressed to find any parallels here.  You never quite know whether Mick (impeccably played by Malcolm McDowell) is imagining the whole thing or if it is real.  Ultimately you lose yourself in the action as it shifts from black and white to color, underscored by the repeated use of "Sanctus" from the Missa Luba album by the Kenyan National Choir.

Zabriskie Point is even more surrealistic as Michelangelo Antonioni appears to be having a peyote dream grown out of his vision of misplaced American youth and their urge to rebel against the small town order as personified by a developer, played by Rod Taylor.  Much of the action takes place in the desert, Antonioni being a big fan of barren landscapes.  Watching it again, it really does seem to play on classic Western themes, as the lead character Mark finds himself a fugitive after shooting a cop during a student riot in LA.  He escapes to the desert, bringing a young woman, Daria, along with him.

Restlessness is the subtext in both films, and that is what I feel today, especially in the youth yearning for something to break the monotony of our increasingly homogeneous lives.  Travel is usually a better recourse than riots and plotting terrorist activities, but if you want to make a point in America, or anywhere else in the world for that matter, it seems violence has become the favorite form of recourse.
Posted by James Ferguson at 3:34 PM