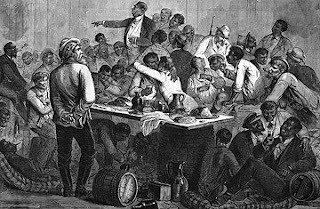 You don't hear much of Juneteenth, celebrated in the month of June, when in 1865 slavery was officially abolished in Texas.  Ralph Ellison spent the second half of his life crafting a novel around this theme, only to die before completing a manuscript that had stretched to over 2000 pages.  In 1999, his literary executor, John F. Callahan, put together a condensed form of the novel that met mixed reviews.  I'm still waiting for the unabridged novel.

In it, we meet a young "hi-yaller" man who passes for white, and eventually becomes consumed with hatred for his own race.   Ellison's ambition was to create a grand symphony of a novel that dealt with the multi-layered aspects of being Black in America, something along the lines of Duke Ellington's Black, Brown and Beige Suite.  Ellison's first protagonist sought to be invisible in society.  In Juneteenth, Bliss makes himself all too visible and defiant in his attempt to eradicate his past.

Ellison had been working on the book until his death in 1994.  It was set in the 1950s, at the height of American xenophobia, but he also had to contend with post-Civil Rights Act America, which believed itself to be living in a post-racial society.  This has been a conundrum for any writer dealing with racial tensions in contemporary America.  While we can't deny the progress that has been made in the United States, many of the same structural problems remain from before the Civil Rights movement.

Sadly, it is easier to deny these problems than it is to address them, especially in a legislation-weary society who already thinks too much has been done to level the playing field.  We see affirmative action constantly called into question by conservative law-makers who would like to see it rolled back.  You also see a former Black lawmaker like Allen West, who could very well be a modern-day Bliss, replete with his own blog, castigating the social welfare structure that he believes too many Blacks have grown dependent on.

The most vocal Black leaders today seem to be coming from the conservative camp, pushing for an end to affirmative action and other entitlement programs that they believe suppress their race, even though they benefited from these programs themselves.  A key moment was when Condeleeza Rice and Colin Powell, who both served the Bush administration, found themselves at opposite ends of the spectrum on affirmative action.  Powell defending it, Rice admonishing it.

Part of the problem is that persons like Condi Rice are all too willing to accept the white narrative because it makes them popular in the Republican Party.  Dr. Ben Carson has become a sensation among Tea Partiers for speaking out against Obama and the "socialist" programs he believes the President represents.  Former Sec. of State Rice chooses to attack the Obama on Foreign Policy.

This is a far cry from the Republican Party of 1865, which fought for abolition and began the process of Reconstruction, which was met with bitter defiance among unvanquished whites in the South.  No sooner did Reconstruction start than the Ku Klux Klan was formed to reclaim the Southern legacy lost during the war, headed by former Confederate General Nathan Bedford Forrest.

The legacy of the Civil Rights movement is steeped in violence.  Not just Blacks, but Whites who joined Blacks during the movement, were subject to unwarranted attacks.  On June 21, 1964, Mickey Schwermer and Andrew Goldman, along with James Chaney, were killed by Klan members near the town of Philadephia, Mississippi.  Black was no longer a matter of skin color but of alliance, especially in the minds of those who wanted to keep their segregated South. 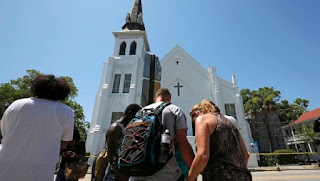 Here we are in June with another heinous crime galvanizing the country in support of a congregation which lost nine of its parishioners in a racially-motivated crime that has forced South Carolina to reconsider its "legacy."  The tide has turned in that a violent act like this is no longer tolerated in the South, with both the Charleston mayor and police chief speaking out harshly against those who condone such acts of terror, which thankfully are very few.   Mayor Riley even went a step further to condemn the "gun culture" in this country.

All is not lost this Juneteenth.