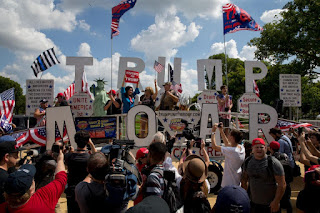 So much for the Mother of All Rallies.  No more than 1800 Trumpers pitched up to show their support for the president, turning the rally into prime fodder for late night comics.  As it turned out, the Juggalos drew a bigger crowd, holding a free concert by the Lincoln Memorial to protest the FBI designating them as a "hybrid gang."

Yet MOAR has to be happy it got as much coverage as it did.  Even BBC devoted a segment to them last night.  It seems no matter how small the Trump rally, it still gets coverage as the media loves nothing more than showing what a Trump supporter looks like.  This is pretty much how the Birther campaign gained traction in 2009.

Our flighty president escaped to his New Jersey retreat after another week marred by controversy.  He was getting it from all ends.  Right-wingers were furious he backtracked on DACA by working on a "deal" with the Democrats.  Others were upset when he once again equated Antifa with the neo-Nazis in Charlottesville, claiming he was vindicated by comments on social media supporting his viewpoint.  Worst of all, the fashionistas ganged up on him for his mismatched suit.

It seems Trump wants to expand the definition of "hate groups" to include what he regards as militant left-wing organizations, or "some very bad people" as he calls them.  In the wake of the Charlottesville riot, the right-wing media has been quick to portray Antifa and Black Lives Matters as "black supremacy" organizations.  Conservative pundits are desperate to create a leftist equivalent to white supremacist groups, so as to deflect attention away from their own biases.

Trump has repeatedly played into this loose talk, which is why Jemele Hill called him a "white supremacist," among other things.  Naturally, he took offense to this and vented his wrath not only on her but ESPN for not dismissing her the way it did Curt Schilling.  Here again we see a false equivalence.  As this article points out, Schilling had been warned, then suspended, and then ultimately fired for his ongoing rants on social media.  Hill has not reached that stage of impudence.  Not only that, she apologized for her comments.  Something Schilling never did.

It is this false equivalence that is so frustrating.  Trump and his supporters used it to great effect throughout the campaign, pointing their fingers at Hillary whenever the media brought up Trump's numerous transgressions.  Attempts to draw his supporters out on talk shows were easily diverted by bringing up Hillary's e-mail controversy as if this trumped anything the Donald did.

Fortunately, it is proving a little harder to deflect attention away from Trump's ever-equivocating statements on white supremacy because no one wants to be called a racist, no matter how racist they are.  Not even Richard Spencer.  Equivocation has become a very effective technique among white supremacists.

Bringing up Charlottesville again helps to mitigate whatever damage his vacillation on DACA did among right-wing groups.  Trump wants to play both ends against the middle, hoping to force Congress to act on his wall, the ultimate symbol of white supremacy.  This seems to be the only issue he holds dear, except maybe for his Muslim ban, which he recently brought up again too.

For its part, Congress refuses to act on either one, which frustrates Donald to no end.  Maybe he thinks by playing nice to "Chuck and Nancy" he can get Democrats to go along with his tougher border security.  But, Chuck said the wall is a non-starter, so one can expect Trump to drop DACA again soon.  The Dreamers never really mattered to him.

However, it seems his supporters are confused by all these mixed signals, which maybe why so few turned up for this big rally in Washington.  Organizers hoped to draw one million loyal Trumpers.  They fell 998,000 short of that mark. This can't sit well with a president who judges his popularity by the size of his crowds.