Everyone is talking about Oprah 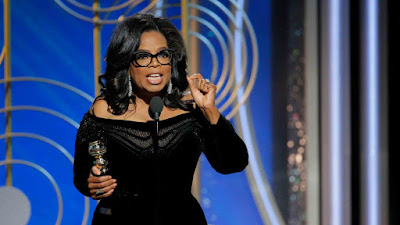 After her Golden Globes speech, Oprah is the most talked about person on television.  She brought the auditorium to its feet with as she recounted how Recy Taylor bucked the system back in 1944, and her impressions of Sidney Pottier winning the Oscar for Lilies of the Field.  It was a life-affirming speech like the ones Barack Obama enjoyed giving and the parallel was not lost on anyone.  Many persons started chanting Oprah for President that evening.

Why not?  Any thoughts that experience matters were thrown out the window when Donald J. Trump won the office last year.  This seemed to be the only thing holding Oprah back.  Now she just says, "oh, oh."

Americans no longer place much value on a candidate's resume, at least when it comes to serving in government.  We have become extremely cynical, believing that a politician is only in it for the money.  Jokes abound like the one where politicians should wear patches of their corporate sponsors like race car drivers do, or that the only good politician is a dead politician, politically dead anyway.

Yet, we have elected our share of first-timers over the years and they haven't proven anymore adept at managing government than have traditional candidates.  Ronald Reagan comes to mind.  Bad actor turned governor and eventually president, he pretty much left management up to those around him.  The result was one of the most corrupt governments in modern history with over 20 indictments.  Trump's administration is well on its way to matching those numbers.

Many Americans are desperate for anyone other than Trump, and feel that only someone with a big personality like Oprah can topple him in an election.  No names are emerging from the Democratic field other than Bernie and Joe Biden, both well past 70.  Oprah seems youthful in her early 60s and is looking better than ever with her wavy black hair and healthy full figure.  She looked absolutely radiant Sunday night.

Oprah is worth considering.  She has been a positive spokesperson for so many issues over the years and has grown into one of the most powerful persons in the entertainment industry.  An unlikely rise when you consider her roots.  Most importantly, she would have the wholehearted support of Democrats across the political spectrum, assuming she runs as a Democrat.

However, I'm afraid this would be a major setback for traditional politics.  The grassroots campaign that gave us candidates like Shirley Chisholm, Jesse Jackson, and Barack Obama will be lost.  How could such a candidate compete with larger-than-life personalities?

Maybe it just a phase we are going through.  The idea of "Oprah" has been tossed about for the better part of two decades.  She couldn't be any worse than Donald J. Trump.  Maybe we should just skip the primaries all together and go straight to the general election in 2020 and let these two battle it out on prime time television -- the Reality Show of the Century!

Posted by James Ferguson at 8:53 AM