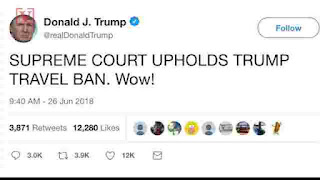 Remember all this talk about how Obama would appoint "activist judges?"  Well, it seems the Republicans have an extra ace in the hole in Neil Gorsuch.  For some strange reason, unbeknownst to any Constitutional law, five Supreme Court justices have decided to uphold Trump's self-professed Muslim Ban.  Granted, the executive order had gone through three writings in an attempt to remove the most contentious aspects of it, but nevertheless this is a ban that should have never been allowed to happen because the motives were clear.  As a result of this 5-4 vote, Trump is now fully emboldened to carry out an immigration policy that will be the most punitive we have  seen since WWII.

This past week, the Supreme Court also empowered Texas to gerrymander voting districts so that Republicans could maintain their hold on the state's politics.  We can expect more such cases from other states, as gerrymandering has become de rigueur in the Republican effort to maintain a chokehold on American politics.  Even if they suffer massive defeats this November, they will still have the Supreme Court to fall back on, as they did throughout the Obama administration.

We learned just how important holding political sway on the Supreme Court is!  Republicans have held the majority in the highest court of the land for the past 45 years.  Yes, forty-five fucking years!  They made it their mission during the Nixon administration, and haven't let go since.  Granted, a few of these picks didn't turn out to be as conservative as Republicans thought, but even with the occasional break, Republicans have to be happy with what they accomplished.  It's like having your own Supreme Council, as in Iran, that can overturn anything the Democrats try to do.

This has almost nothing to do with the Constitution, other than the perversion of it, as we have seen in some of Justices Thomas's, Alito's and now Gorsuch's opinions.  This court has undermined the 15th amendment and Voting Rights Act to uphold corporate sponsorship in the infamous Citizens United case, and now goes a step further in accepting Texas' notoriously gerrymandered districts.

For these conservative judges, the Constitution is something they can pick through to justify their opinions, similar to the way conservative politicians use the Bible.  They take passages out of context, yet proclaim they are ascribing to the "original intent" of the Constitution.  I suppose to some degree they have a point, since initially the Constitution gave no voting rights to minorities.  This was something we had to fight for 80 years later in the most bloody American war.

However, the Founding Fathers did give room for amendments, and Congress has utilized that right, and the Supreme Court upheld these amendments, so why is the current conservative court working so hard to undermine them?

Part of the problem is that judges like Thomas, Alito and Gorsuch are no more than proxies for conservative political interests. All had rather unsubstantial careers on the bench, especially Thomas and Alito, but here they are now in the most powerful court in America.  Justices Roberts and Kennedy's rare dissents have been most welcome, but they are indebted to these same conservative interests.

Upholding the Muslim ban makes no sense at all.  This was one of those times you expected Roberts and/or Kennedy to vote with the so-called liberal faction.  This was a ban issued by an impetuous president determined to make good on his campaign promise, which is exactly how the lower federal courts read it.  There was no reason to think otherwise.  Yet, Roberts and Kennedy chose to support it, I suppose not to undermine the authority of the President, as it is seen as his prerogative to protect the nation.  But, these same judges had no problem holding Obama in check when he overstepped his executive authority, which is exactly what Trump did here.

Justices Roberts and Kennedy look more like political hacks than Supreme Court justices after this decision.  It has tarnished whatever impression they were trying to give as being neutral.  They have made one of the worst decisions in the past 80 years.  Vox compares it to the Supreme Court decision to uphold the internment of Japanese-Americans during World War II.  This leads one to suspect if persons try to take the unlawful detentions taking place along the border all the way to the Supreme Court, these same justices are most likely going to hold up this heinous immigration policy as well.

Little wonder Trump is crowing in his tweets.  This is the sorry state of American politics we have descended to.