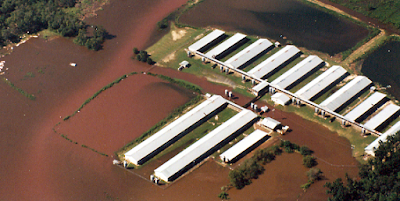 They call them manure lagoons, which seems like an awfully nice term for shit ponds.  This is where all the hog shit goes from those huge hog farms in the Carolinas.  There are probably more hogs in North Carolina than there are people.  All to feed our insatiable appetite for pork.  One can imagine how this will affect Coastal Carolina, where many of these hog farms are located.

Hog farming is an ugly business.  The Danes raise a considerable number of hogs, and to try to ease the overflow in their small low-lying country, have set up hog farms here in Lithuania.  The stench is overwhelming, leading many local inhabitants to complain how the government ever allowed Danish pork companies to set up their operations here, not to mention the periodic "swine fever" that breaks out among these pigs.  This year, nearly 20,000 pigs had to be culled.

At least pig farming is regulated to some degree in Europe, which is more than you can say for North Carolina, which is swamped with law suits.  The state senate reaction was to limit the payouts, as it doesn't want to lose its profitable pork industry to civil action.  So, you can imagine what local regulations are like.

The hog farmers scrambled overtime to drain their lagoons before the storm surge.  It seems that the worst case scenario has been avoided and Coastal Carolina won't be covered in pig shit.  His Trumpness would have had a hard time living that down in an election year, not to mention state and US representatives up for re-election.

However, the Donald had his own case of swine fever, babbling incoherently about his record this past week.  He seemed to only reinforce what had been said in recent books and anonymous op-eds about his declining mental state.  He tried to play down the staggering revised death toll from Hurricane Maria by saying it wasn't the White House's fault, but that of Puerto Rico's poor infrastructure and political bickering in Congress.  His FEMA team, led by embattled Kirstjen Nielsen, did a bang-up job in his mind.  It doesn't matter that the death toll exceeds that of Katrina in 2005, which became an albatross around George Bush's neck, helping the Democrats retake Congress in 2006.

Talk of a red wave in November has since receded, as not even the "record economy" is enough to buoy up his floundering administration.  The guy hits 4% GDP growth for one quarter and he acts like it is the greatest recorded economic growth in history, especially since it edged out unemployment last month.  I'm sure Republican candidates are dreading the third quarter numbers due out in October, as it is highly doubtful he will hit 4% again.

Hurricane Florence couldn't have come at a worst time for Republicans.  It brings back all those ugly memories of how poorly Republican presidents and Congresspersons have responded to hurricanes.  It has always been Republican US representatives who have been slow to provide disaster relief, as long it doesn't affect their individual states.  Puerto Rico was perfect in this case, as it has no representation in Congress, so they could dawdle as long as they wanted over finally lending relief to the island territory, which many Americans think is a foreign country.

Of course, Trump and fellow Republicans will try to use Florence to help voters forget their past record, rushing aid to the Carolinas and taking advantage of as many photo-ops as possible.  However, if there is a way to botch the recovery, the Donald will find it, as he has just about everything else during his tumultuous term in office.

What we have in Washington is essentially a "manure lagoon," filled with all the shit coming out of these politicians mouths for the past 21 months.  There is only so much any reasonably sane person can take of this, including die-hard Trump supporters, who themselves are beginning to question their anointed one's mental state.  Why else would all these senior officials and staffers in his administration divulge so much to Bob Woodward, who has made it his mission to take presidents down?

The cry for help inside the Trump White House is deafening, but Republican lawmakers refuse to hear it, stifling attempts to hold the president accountable.  Again, this isn't much different than what North Carolina Republican lawmakers have tried to do to make their manure lagoons invisible to the public eye.  All it takes is a hurricane to expose the shit ponds they have created, and we have two more storms out in the Atlantic and one churning up waters in the Caribbean.
Posted by James Ferguson at 11:35 AM