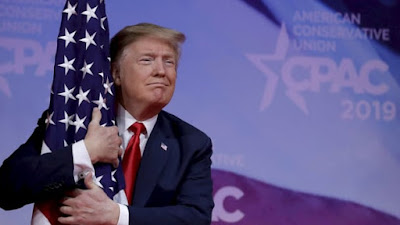 You really have to wonder what happened to the Grand Old Party?  It's gone from bad to worst to now literally scraping the bottom of the barrel in what has to be the most grotesque CPAC conference yet.  It wasn't just Trump's rambling incoherent two-hour speech after hugging the American flag, but a litany of horrible speakers preying on the worst conservative instincts and drawing cheers from the audience.

It was like Trump was staging his own version of The Apprentice with a load of has-been political operatives hoping to regain their glow in the conservative light.  Michelle Malkin was probably the worst, as she shamelessly evoked the "ghost of John McCain" to admonish RINO's in the party who won't get on the right side of the wall.  This is an Asian-American mind you playing into the white bread world of the Republican Party that has no time for new immigrants, legal or illegal.  I guess she hoped to score brownie points with Commander Trump.

Sebastian Gorka and Ted Cruz ripped into the Green New Deal, proposed by Alexandria Occasio-Cortez, telling Magaheads that Democrats want to kill all our cows so that we will no longer be able to eat hamberders, I mean hamburgers.  AOC has become the favorite whipping post of Republicans these days, treating her like the reincarnation of Stalin, Hitler and Mao all rolled into one.  Truly mind boggling.

Whatever legitimacy CPAC may have carried at one time is gone.  This is an empty shell of a conservative political action committee that has sold itself completely to Trump and all the fools who still believe in him.  You can only marvel at the ability of these shameless politicians and pundits to keep a straight face as they feed all this bullshit to an audience that has lost all ability to discern fact from feces.

There are enough clips to keep comedians busy all week but it is nothing to laugh at.  It is appallingly sad that this is the way many conservatives now act.  They have lost any ability to think, much less know what is going on in the world.  They have become blinded by the excesses of a president and a political party whose only interest is to gut the government and give tax breaks to their wealthy benefactors.  Yet, the Republicans believe they are the Party of God.

The Grand Old Party is now an abject failure.  The only legacy they can claim is that of the fringe movements like The Know Nothings, the Birchers and the Klu Klux Klan.  They have managed to weave all the worst elements of the conservative movement into a train wreck of a political party that survives simply because too many people are blind to their own shame.

As bad as Malkin, Cruz, Gorkin, Meadows and the rest of the headline acts were, none could match the Grand Poobah himself who went off on quite possibly his most audacious riff yet, not showing the least shame as he indulged his audience in a steady stream of misleading statements, lies and downright slander that isn't even worth fact-checking because facts no longer matter in the Age of Trump.  It's all about the base, as crass as it is.  They eat up anything he says, utterly smitten by the most glorious con man the United States has ever seen.  The only purpose this Trumpian fuckfest served was to try to take people's minds off the ongoing Cohen hearing on Capitol Hill, where his former fixer revealed the depth's of our President's depravity for those who wanted to hear it.

Trump returned from his aborted summit in Hanoi so that he could bask in the glory of those who appreciate his unique brand of demagoguery, and giving the media really something to follow, not that rat of a lawyer who sold himself out to the feds.  It was vintage Trump and for that we should all truly be ashamed to be part of this spectacle.
Posted by James Ferguson at 9:35 PM