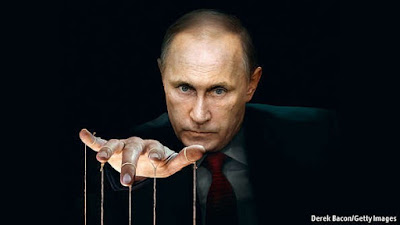 You ever wonder what Russian hackers got from the Republican National Committee?  We were led to believe they got into old accounts and it wasn't anything damaging in the way of information, which never saw the light of day.  Yet, three years later here are the Republicans pretty much in lockstep with the President on every issue, particularly those that favor Russian interests.  Mitch McConnell was effectively able to lift sanctions on one of Putin's most notorious oligarchs at the beginning of the year, resulting in a cushy investment in Kentucky.  However, it seems there was a lot of pressure on him and other Republicans to lift these sanctions from the outside.

Russia has not only severely compromised the President, but to one degree or another appears to have compromised Republican Congresspersons.  Despite the repeated calls to provide funding to protect the 2018 midterm elections from unwarranted hacking, Republicans deferred and continue to defer on the issue.  It seems the Republicans are content with the hacking as long as only Democratic political leaders are exposed.

It is impossible to say how much damage the Russian hacking did to Hillary's campaign in 2016, but it certainly helped to deflect attention away from Trump's dubious ties to Russia.  No sooner did the White House release an official statement on Russian hacking than wikileaks dumped a second batch of hacked Democratic National Committee e-mails.  Amazingly, the national media fell for the diversion.  The unprecedented joint statement from the WH was relegated to the back pages of the news.  This new round of hacked letters also helped bury the Access Hollywood tape in which Trump readily admitted to his predatory sexual behavior.

No one seemed to question the legitimacy of these leaked documents.  This was every bit as scandalous as Watergate when Nixon had his henchmen break into Democratic National Headquarters and steal information they thought damaging to the McGovern campaign.  Nixon won the election in a landslide thanks to McGovern's numerous gaffes, but eventually the burglary was ratted out and Nixon forced to resign.

It seems we have become so inured to the idea that nothing is private on the Internet that we accept the hacked e-mails as the price one pays for using the Internet.  No one seemed to bat an eyelash over the DNC being hacked.  It was somehow their fault for not having better cybersecurity.   At least, this is what Donald Trump implied after the second wikileaks dump.  He still wasn't off the hook but Hillary's poll numbers began to erode and by late October he was polling within the margin of error in key states, which he ultimately won.

Another thing I find interesting about the 2016 election is that Trump somehow managed to win every toss-up state, except Nevada, and even two states that were considered firmly in Hillary's camp, Pennsylvania and Wisconsin.   He almost won Minnesota too.  This is a pretty amazing stroke of luck, considering that these states voted overwhelming for Obama in 2012, when the economy was much worse.  Four years of steady economic improvement seemed to go for naught.

It has now come to light that Russian hackers breached polling stations in at least 21 states, and attempted to access all 50 state election systems.  Seems the GRU was leaving nothing to chance.  We had been warned before the election how easily polling booths could be tampered with, and election results twisted.  There are numerous other ways to access these machines remotely.

It's a pretty tall order swinging almost 1 million votes in three key states.  That's the number Obama won Michigan, Wisconsin and Pennsylvania by in 2012.  You have to approach it in multiple ways and Russian interference can be traced throughout the process.  First, you do everything you can to discredit Hillary.  Russians used trolls and bots to target these states in the last month of the election.  They spread an inordinate amount of disinformation largely aimed at convincing "Rustbelt" voters that their economy was in ruin and only Trump could pull them out of this depression.  For his part, Trump hit the same themes on the campaign trail.  It took a lot of convincing as all three economies were relatively healthy at the time.

This method proved remarkably successful in Britain, where Brexiteers, with the help of their Russian friends, managed to convince Britons that they were better off without the EU.  The disinformation campaign was in hyperdrive in 2016, but Remainers were convinced their fellow countrymen wouldn't fall for these blatant lies.  It turned out that they did by a relatively narrow margin.

Still, you want some insurance, so you access state election databases, target key demographics and ultimately target the polling booths themselves.  However, you can't do this without the help of well-placed friends.  All three states were now led by Republican governors and legislatures.  Although no one has yet been able to prove it, the likelihood is great that Russian agents worked with Republican party operatives to swing key voting districts Trump's way.

It's not a big stretch.  Russia was using influence peddling throughout the Republican Party, most notably in the NRA, where they funneled $30 million to help push Trump across the line.  Scores of other revelations show how Russian oligarchs helped bankroll Congressional campaigns, even those of McCain and Graham, perhaps the two most ardent Russophobes on Capitol Hill.

Russia didn't even try to hide its influence peddling.  Maria Butina was pictured with numerous prominent Republicans including the governor of Wisconsin, Scott Walker.  She served as the sexy go-between for Alexander Torshin and the GOP.  Torshin is the deputy chairman of the Russian Central Bank and member of the NRA since 2012.

Despite Mueller's exhaustive investigation into Russian influence peddling during the election, little could be established to link prominent American politicians to Russian officials.  In fact, Mueller was not tasked to find collusion, but rather the degree to which Russian hackers had infiltrated the election process and which persons close to the Trump campaign were involved.  "No collusion" was never more than a means to distract Americans from the real intent of the investigation.  A very effective Russian tactic.

In the end, Mueller indicted several prominent persons, including Maria Butina, but these were all periphery figures in the Trump and Republican campaigns.  You might call them "deplorables," which the Republican rank and file took as a term of endearment after Hillary accused Trump of surrounding himself with a "basket of deplorables" on the campaign trail.

Throughout the whole process, Republicans did their best to conceal information, obstruct Congressional investigations and protect Trump.  Trump infamously cast the Mueller investigation as a "witch hunt" and led many conservatives to believe that the FBI is part of a "deep state" actively undermining his administration.  This view has been reinforced by the conservative media at every stage of the Dept. of Justice investigation.

This degree of complicity is unprecedented.  Not even Nixon enjoyed this kind of Republican support on Capitol Hill.  Once the case of obstruction of justice became so compelling, he was urged to resign by his own party.  So far, only one Republican Congressperson, Justin Amash, has come out for impeachment and has been publicly scorned by his party for it.

It doesn't take a special investigator to see the Republican Party has been severely compromised by Russian influence peddling, but even today most of the media focus remains on Trump.  Mueller outlined 10 incidents where Trump potentially obstructed justice, but left it up to Congress to determine his fate.  Mueller is set to testify before Congress on July 17 unless the President bars him.  It is doubtful the former special investigator will add anything more to what he has already written in the report.

This means it is up to the news media to uncover the full extent of Russian intrusion into the 2016 campaign, not just Trump but the entire Republican Party.  If nothing else, this information will hold the GOP accountable at the ballot box next year.  Never has it been more important for the American electorate to speak out against the massive abuses that were committed in 2016 to usurp the democratic process.