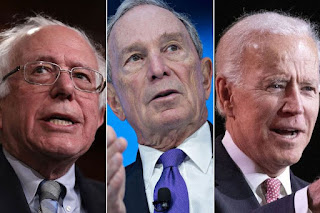 Makes me think of the three old farmers from The Fantastic Mr. Fox.  It is a sorry state of affairs when the Democratic primaries come down to three old white men, according to a recent Reuters Survey.

I thought at this point a younger candidate would emerge, but the only two major candidates under 50 still left in the race are Andrew Yang and Mayor Pete, both polling poorly in national surveys, although Pete is doing well in Iowa.  Of the women, only Elizabeth Warren and Amy Klobuchar remain serious contenders, while Tulsi battles it out with Hillary over a slander suit.

GOP strategists are licking their chops at the prospect of Trump going up against a candidate older than him.  So much for the age factor.  Trump can claim to be the spring chicken of the bunch at 73, no matter how miserably out of shape he is.  It was Bernie who had the heart attack back in October.  All Trump has to do now is dump Pence and put Nikki Haley on the ticket and his re-election will be sealed.

There's still hope fortunes will turn.  Liz Warren and Mayor Pete are both polling well in Iowa, and have a lot of support on the ground.  Amy Klobuchar is not that far behind.

Mayor Bloom has invested no energy in Iowa, and his prospects in New Hampshire look equally dim.  Nevertheless, there are those who believe he could steal the nomination.  Biden remains a paper tiger.  Bernie is the only one of the three old farmers who has a devoted base, energized by Hillary's recent comments.

It should be an interesting caucus next Tuesday.  Still, I wonder why Democrats have gravitated to these old guys?  I suppose it is name recognition.  These guys have been around a long time.  However, the Democrats have won with youth, not candidates who would all be in their 80s in their first term as president, if elected.

Yet, the only young candidate to gain any real traction is Mayor Pete, who barely qualified to run at 38.  Amy has been pounding on his credentials for months, claiming that a woman of his age and limited political experience wouldn't get any attention.  If AOC was a few years older, you bet she would be getting all kinds of attention.  As it is, Tulsi hasn't suffered in the media, and she is the same age as Pete.

What we should be questioning is the vitality of three old men to function in the most politically demanding role in the world?  We see how Trump takes virtually all his weekends off, and limits his work day to about four hours.  He rarely travels abroad and complains like hell when he does.  At least once, he has cut his foreign trip short, apparently because he couldn't get a good night's sleep thinking about the impeachment inquiry back home.  This is the sad fact of turning old.

Liz also crossed the 70 mark last June.  She at least looks ten years younger.  You wouldn't think her any older than Amy Klobuchar, who is 59.  It didn't hurt when some right-wing rag tried to claim she was having an affair with a 24-year old Marine.  That's one hot grandma!

Sadly, Bernie, Biden and Bloomberg all look their age. Yet, for some odd reason they seem to appeal to young voters, especially Bernie, who has AOC opening his rallies.  You'd think Millennials would be flocking to Mayor Pete or Andrew Yang, who better represent their interests.  However, one has to think apathy is winning out here.

If we are stuck with these three old guys after Super Tuesday on March 3, then things will really be depressing.  It is hard to imagine any real enthusiasm through the rest of the campaign.  We will once again be forced to rationalize our vote this November one way or the other.