Santorum says Obama agenda not "based on Bible" 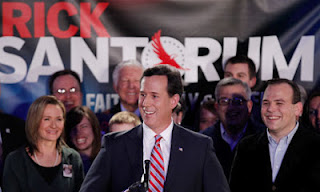 I realize Rick Santorum is a political opportunist of the lowest order, but I would think an attack like this is even beneath his already low standards,


"He is imposing his values on the Christian church. He can categorize those values anyway he wants. I'm not going to," Santorum told reporters.


At some point you would think enough is enough, that Republican voters would refuse to accept this phlegm that their candidates keep coughing up on the campaign trail, but given dear Rick's surge in the polls, it seems that the teabaggers have found their "man."


Also worth noting is his less than original use of the "O" in his name.
Posted by James Ferguson at 8:09 AM