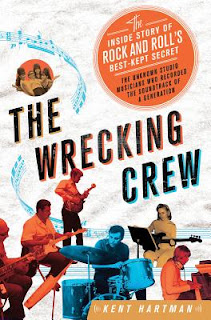 This looks like it could be an interesting diversion,  The Wrecking Crew,

On hit record after hit record by everyone from the Byrds, the Beach Boys, and the Monkees to the Grass Roots, the 5th Dimension, Sonny &  Cher, and Simon & Garfunkel, this collection of West Coast studio musicians from diverse backgrounds established themselves as the driving sound of pop music—sometimes over the objection of actual band members forced to make way for Wrecking Crew members. Industry insider Kent Hartman tells the dramatic, definitive story of the musicians who forged a reputation throughout the business as the secret weapons behind the top recording stars.

Posted by James Ferguson at 3:09 PM