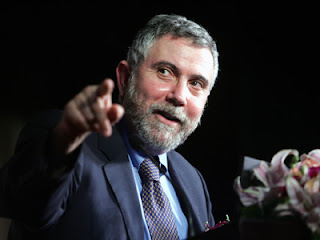 I caught the tail end of Paul Krugman plugging his new book End this Depression Now! on Charlie Rose last night.  I wasn't sure what book he was referring to until I "googled" amazon.  He made his usual trenchant observations.  He sized up Europe very well.  And, offered some sound advise for the Obama administration and the Fed.  His most biting comments were directed at Paul Ryan, whose proposed budget he said was a joke.  There is nothing concrete about it other than the domestic cuts he proposed.  Krugman supported Larry Summers' position that domestic cuts are the worst possible thing to do at the moment.  Not only do they add to unemployment, but offer no debt relief given the corporate tax cuts the Republicans, and even Obama, are proposing as well.  But, in this new age of Austerity, which is all too reminiscent of how Hoover tried to tackle the Depression, the prevailing wisdom seems to be that "belt-tightening" is the answer.  As one would expect, Krugman effectively argues the opposite.
Posted by James Ferguson at 8:15 AM