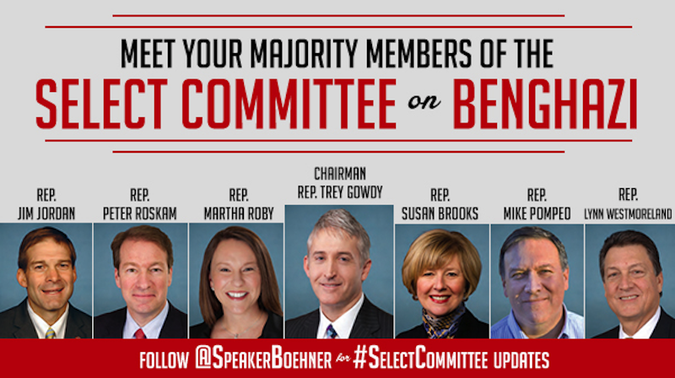 It strikes me as a no-brainer that the Democrats should boycott this faux select committee on Benghazi since it is so obviously a political stunt.  Yet, there were 7 conservative Democrats who voted for the committee and others who expressed interest in being on it, including Rep. Elijah Cummings, so one can expect the Republicans will find 5 Dems to fill the remaining seats.  The Republicans would like everyone to think the panel is fair and balanced, borrowing the tagline from Fox News

Why the Democrats continue to play these Republican games is beyond me.  Virtually the whole country knows this panel is a joke, headed by a South Carolina fire-eater, Trey Gowdy, who thinks expert testimony is unnecessary.  Other arch-conservatives fill the 7 Republican seats, insuring a majority vote in whatever decision the select panel reaches on the administration's role in the Great Benghazi Cover-Up the GOP has been pitching since 2012.

It doesn't matter that we have already had 4 hearings, numerous investigations, scores of expert testimony and wasted countless reams of paper on this grand inquisition that failed to yield any serious wrong-doing by the administration.  But, the Republicans need an issue this election cycle and so here we go all over again.

Candy Crowley had Michelle Bachmann and Debbie Wasserman Schultz engage in a pre-committee debate, which rehashed all the talking points.  When confronted by the polls that Americans don't give a shit about Benghazi, Bachmann mumbled something about Americans being able to walk and chew gum at the same time.  I assume she was referring to Americans' ability to address more than one issue at one time.  If that is the case, why are House Republicans so fixated on this issue when Americans are apparently far more concerned with jobs and health care?  It seems the GOP can't walk and chew gum at the same time.

It feels like the Republlicans have resurrected the commie witch hunts of the 50s with Gowdy as a latter-day "Tail Gunner Joe" McCarthy.  This kind of grandstanding is exactly why Americans have such a low opinion of Congress and if the Democrats had any sense they would stay as far away from this political circus as they can.  Let the Republicans have their "seven horsemen," and explain this incredible waste of effort to the public.