Martyrs of the Race Course 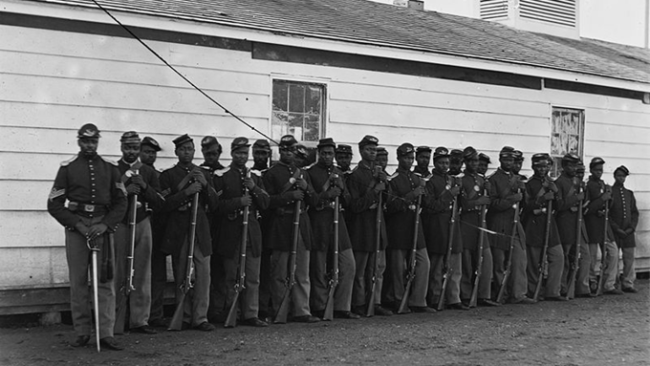 Memorial Day means different things to different people, but it is odd that the official U.S. Department of Veteran Affairs website makes no mention of the first Decoration Day held in Charleston, South Carolina, on May 1, 1865.  Instead, the VA lists the typical story of Waterloo, New York, which was officially commemorated by President Andrew Johnson in 1866.

David Blight offers an excellent chapter in Race and Reunion on the first Decoration Day, describing how the 21st US Colored Infantry marched into Charleston in late spring of 1865, accepted the formal surrender of the city and gave the Union dead found in a mass grave of a makeshift prison camp a proper burial.  They also cleaned up the former horse racetrack, designating it as a cemetery for the "Martyrs of the Race Course."

This event was celebrated by some 10,000 people, including white Charlestonians, with a parade, military drills, a children's choir singing "We'll Rally Around the Flag," and a huge picnic afterward. Fortunately, a correspondent's record survived in the archives of the New York Tribune.

In the chapter, Blight went onto note how the memorial became co-opted by other towns and cities around the country and eventually came to be a national holiday, but it seems these black infantry soldiers never got their due.  Not surprising since it wasn't until 1948 that Harry Truman desegregated the Armed Forces with Executive Order 9981.  It didn't matter that blacks had fought along side whites in the Civil War and in two world wars, they were still considered separate and not quite equal.  What should have been a reconciliation back in 1865 was deferred 73 years, much like the Civil Rights movement itself.

Meanwhile in the South, Memorial Day ceremonies revolved around the fallen Confederacy, marked on days that honored the final surrender of General Joseph Johnston and the birthdays of Stonewall Jackson and Jefferson Davis, ranging from April 26 to June 3.  Charleston kept its initial celebration quietly under the rug.

Memorial Day has grown to commemorate all American war dead and was officially designated a national holiday in 1971.  The military aspect of it has receded a bit.  There are not the big parades like there used to be, but still many people go to cemeteries to honor fallen soldiers.  A somber ceremony is carried out each year at Arlington National Cemetery as the dead has grown considerably since 1865.

But, it seems to me that not only are events like that in Charleston in 1865 lost to the collective imagination, but the brutality of war itself, as we seem to keep getting ourselves mired in wars that serve little purpose and leave deaths and casualties far beyond the official tally of fallen American soldiers.  Moments like these should give us pause, like it did those soldiers of the 21st US Colored Infantry.
Posted by James Ferguson at 7:12 PM