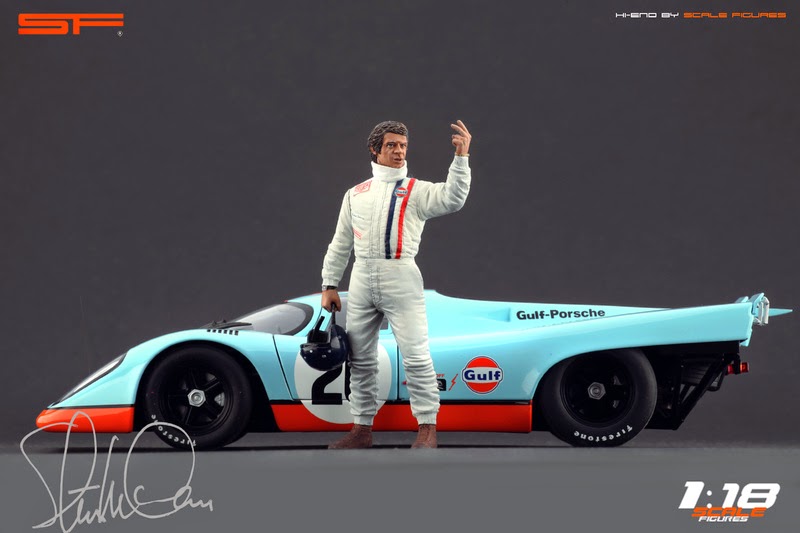 Steve McQueen's Le Mans Porsche 917 is expected to fetch $20 million on the auction block.  The iconic racing car was picked up a decade ago in a "barn find" and has been immaculately restored.  The film from which it dates is considered the greatest racing film ever made, in part because actual footage from the 1970 24 Hours of Le Mans was incorporated into the movie thanks to cameras mounted on several racing cars for this expressed purpose.

The car apparently rusted away in a French barn until 2001 when it was bought for an undisclosed sum by an undisclosed owner.  Now it goes on the auction block at the Pebble Beach Car Show, one of the elite automobile events of the year.

A.J. Baime provides a bit of the backstory to LeMans in his book, Go Like Hell.  He focuses on Ford's attempt to outrace Ferrari in an effort to restore its brand image.  Ford's entry was a GT40, a joint British-American effort first launched in 1964.  The car's principal designer, Carroll Shelby, became a legend in automaking.  Shelby had previously won at Le Mans in teaming up with Roy Salvadori on the British Aston Martin DBR1  Shelby's cars inspired the Ford Mustang, which became America's most popular sports car.  Not surprisingly, the GT40 is also a valuable collector's item, and was similarly featured in the 1971 film.  The GT40 had won four years in a row before being upstaged by the Porsche 917 in 1970.

Alas, Ferraris, Fords and Porsches have all been superseded in the years since.  The Audi R18 is the beast to beat these days. A lot of folks still prefer the classics, but most of us have to live out the racing experience vicariously through film and scale model cars.