In what probably has to be a new low, Virginia Republicans pay off state senator Philip P. Puckett to resign his position so that the GOP will have the votes to block medicaid expansion.  Puckett will now be the deputy director of the state tobacco commission and his daughter gets a judgeship.  It sounds like something out of the antebellum South and I'm sure won't be ignored this election cycle.

Both the GOP and Puckett deny such a deal took place, but it is so transparent as to be undeniable, especially since they are taking advantage of the absence of two other Democratic senators to call an early session to secure the vote they need to block medicaid expansion, and appoint Puckett's daughter to her new judgeship.

Virginia governor Terry McAuliffe apparently has little recourse.  Obviously the state Republicans did their homework, using both hook and crook to get the advantage they needed in the state legislature.  With political stunts like this, you have to wonder how long an advantage like this will last. 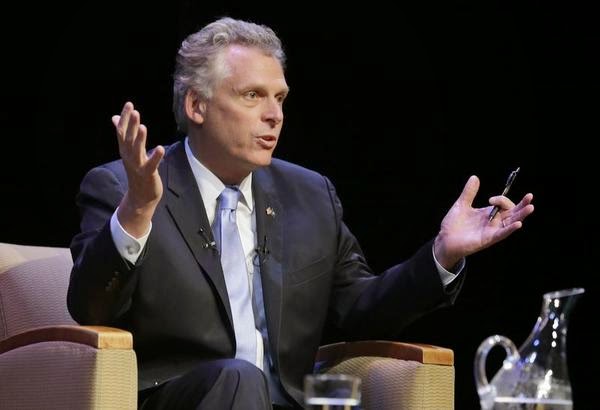 So, why does Virginia continue to fight it?  It is already a state in transition politically, having twice voted for Obama, and elected McAuliffe as governor last year in a bitterly contested election.  You would think Republicans would see the writing on the wall and accept the fact that people want medicaid expansion and full access to the Affordable Care Act.  Instead, we see the same old ideological battle rear its ugly head again.

I suppose this is the result of the overwhelming fear among conservatives that the ACA will eventually lead to a single-payer system that would do away with state health care systems all together.  This was the biggest obstacle for Affordable Care Act, resulting in a myriad of state health insurance exchanges, with rates depending greatly on the number of providers available in those states.

Some states opted out all together, leaving it up to its' residents to apply through the federal health insurance exchange, which got off to a very bad start.  It was hoped at the time that this would be the death knell of "Obamacare," but the federal exchange was able to overcome its rocky start and eventually reach its target goal of new enrollees.  However, the ACA is relying heavily on medicaid expansion to pick up a great number of uninsured Americans who can't afford health insurance even with the substantial discounts available through the exchanges.