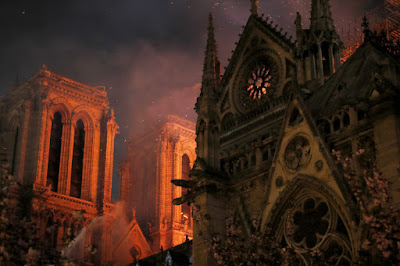 Anyone who has been to Paris has visited Notre-Dame.  The cathedral is one of the most iconic buildings in the world, an international treasure.   It will be rebuilt but the historic loss is incalculable.  The wood construction of the roof was original, dating back to the 12th century, as was much of the wood interior.  This can never be replaced.

Most everyone was left speechless, except CNN of course. Reporters tried to assess the damage as it was happening, stumbling over themselves in the process.  One needs time to process such a great loss. To sort through the ashes and see what can be saved.  To pay tribute to a great building that is now a hollow shell.  We realize in moments like this just how insignificant we are.  As much as we place value on human life, to lose so much of a building that has stood for over 800 years is to lose something even greater than human life.

I remember watching Sokurov's Francofonia a few years back and the question was put near the end of the movie, which is more valuable a great work of art or a human life?  The narrator paused for a moment and then begrudgingly conceded a human life.  I'm not quite so sure.  It's only been in the modern era that we placed value on human lives, although witnessing the human tragedies around the world, it seems not very much value.  A great work of art is a living testament that spans the ages.  To lose all or part of such a treasure is to lose a very tangible piece of who we are as a people.

We tend to think of the preservation movement as a relatively recent phenomena born out of the damage many European cities suffered during WWII.  One of the most visible reminders is the Kaiser Wilhelm Memorial Church in Berlin, which was purposely left in the same state as it was after the war.  However, the preservation movement goes back much further.  It was Viollet-le-Duc who restored Notre-Dame in the mid 19th century, giving it new life after centuries of neglect.

For others like John Ruskin, the cathedral should have been allowed to decay, as the castles had done in his native England.  Stabilize it if you have to, but no modern intrusions.  Viollet-le-Duc wasn't content with such a philosophy, bringing the cathedral back to more or less what it looked like when it was completed by King Louis XI.

The preservation movement has been torn by these rival philosophies ever since.  Here in Vilnius, there is a debate every year whether to reconstruct the old castle on top of the hill.  A few years back the federal government decided to reconstruct the old palace from the 16th century with mixed feelings among the historic architecture community.  Many felt it was enough just to expose the ruins and provide a visitor center where you could see what the old palace and castle looked like in the past.

Notre-Dame de Paris is a different story as it has been in almost continual use since it was first built, although there wasn't much interest expressed in the cathedral after the French Revolution.  That changed with Victor Hugo's The Hunchback of Notre-Dame.  This spurred calls for its restoration, and Viollet-le-Duc undertook the ambitious project in 1844, adding the iconic spire at this time.  He wasn't content to leave well enough alone.  Another major restoration effort took place in 1960s when much of the soot and grime was cleaned from the church, revealing its wonderful polichromy.

If anything positive can come from this horrible event, it is that the people of Paris can come back together again.  For months, the city has been besieged by yellow vests protests that has led to a lot of property damage.  This is why it was easy to suspect some culprit started the fire, but initial reports point to an accident.  President Macron has used the fire as a rally cry for unity and has promised to rebuild the cathedral.  We can all feel for Parisians this day.