Paranoia, they destroy ya

or Populism isn't dead yet 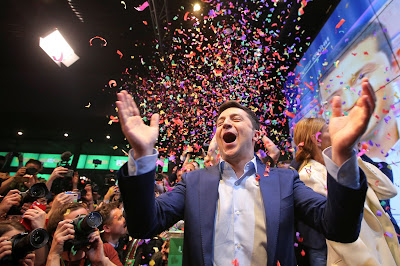 It doesn't seem other countries have learned the lessons from Brexit and Donald Trump.  Ukraine overwhelmingly elected a television comedian as president this past weekend, largely out of disgust with the current president and "chocolate king," which the creators of "Servant of the People" mercilessly maligned for the past four years.  It seems to be a strategy that works even if it brings no beneficial results, but then Moscow is mostly interested in sowing chaos around the world one nation at a time.

I would have liked to think we had reached a turning point after Theresa May failed to get her EU exit deal through the British parliament, and Trump went to Mar-a-Lago to lick his wounds over Easter weekend.  The deputy prime minister of Italy tried to rally European far-right nationalist leaders, but only three showed up for the infamous conference.  You have to figure the evil Dr. Bannon was lurking in the shadows for the rally to be such a miserable failure.  If it had been Russia, everyone would have showed up.

What has made the last two years so interesting is the incompetence we have seen on such a grand scale and how Russia has been able to reassert itself in international politics.  Despite growing unpopularity in his own country, Vladimir Putin has established himself as the pre-eminent negotiator between countries by stirring up unrest and then making it appear he is the only one able to quell the discord.  He started a war in Ukraine five years ago after the overthrow of his handpicked leader, Viktor Yanukovych, and has used the war not only to undermine Ukrainian President Poroshenko, but also US and EU attempts to bolster his government.  Zelensky claims to be a servant of the people, but he is just another puppet for Putin to manipulate and bring Ukraine back into his sphere of influence.

Like Trump, Putin is reacting largely to the slights of the previous administration.  Former President Obama infamously dismissed Putin as a regional player, not fully understanding just how much pull Russia has in its sphere of influence and in points beyond.  Many Latin Americans countries view Russia in a far more positive light than they do the US, and Putin is not afraid to exercise his influence in this region as we are finding out in Venezuela.  Putin knows how to play the long game thanks to a very favorable constitution he helped write that gives him virtually unlimited powers.  Trump could only wish he had such executive authority.

What the Mueller Report doesn't make clear is that Putin never really wanted Trump in the White House.  His aim was to undermine Hillary Clinton's authority by casting her in such a bad light on the campaign trail that she would spend her entire four years trying to overcome Republican-led investigations.  Ironically, Trump now finds himself similarly tied up by Democratic-led investigations in the House.  Either way, Putin won.  With the US effectively out of the picture, he can move around the world trying to bring his new global order into focus.  He still hasn't achieved it, but he is much further along than anyone gives him credit for.  The only thing keeping him in check is China's imperial ambitions.

Trump has proven himself to be a bumbling buffoon on the international stage, unable to negotiate a single meaningful deal, opening the door for Russia at every turn.  In Moscow, they would call him a useful idiot.  He was never really anymore than that, which the Mueller Report makes abundantly clear.  He isn't even effectively able to get his own staff to carry out his orders, much less other countries.  He has bumbled his way into such a mess that whether or not Nancy Pelosi decides to go through with impeachment, his administration has essentially been rendered moot.

It's probably best to keep it that way.  Impeachment hearings would rile up the conservative base, make things uneasy for so-called independents and distract from the upcoming elections.  I can understand Liz Warren's and Kamala Harris' insistence that Trump must be held accountable, but he already gets the lion's share of media attention.  Impeachment hearings would drown out the election.

Putin would love nothing more than to see the US slide down this slippery slope. Who knows he might even nudge Democrats a little by surreptitiously leaking some of the redacted parts of the Mueller Report, or providing some fodder of  his own.

We somehow have to get ourselves beyond Trump, look to the future by imagining a better America rather than continue to allow ourselves to be distracted by this assclown.  He functions entirely by making himself the center of attention while his merry henchmen pick our pockets in the circus bleachers.

Politics is a strange business.  It's easy to get cynical and vote for some unproven entity just because you are fed up with politics as usual.  To say that the working class has become the working poor is a bit of an exaggeration, but people have assumed such enormous debts that they are literally living from one paycheck to the next with little or no retirement plan.  This has led to widespread dissatisfaction which the Democrats need to tap into on the campaign trail.  The last thing we need is to replace one assclown with another, as was the case this past weekend in Ukraine.

I listen to the rhetoric Bernie Sanders is belching out on the campaign trail and really have to wonder why I paid any attention to him last time around.  The guy pushes progressive talking points without really addressing anyone of them.  You could say the same for the other candidates at this stage, but Bernie had three years to hone his message and it is as hollow now as it was in 2016.  Not surprising Moscow used Bernie as well as Trump to undermine Hillary Clinton, as Mueller laid out in his report.

Social media has proven woefully inept at screening out fake news, as the anti-vaccine campaign has proven.  People are largely driven by emotion not reason, and we are all vulnerable to outside influence.  Obama liked to point to a book Nudge as the means by which he tried to gently direct persons toward the greater good, but you can just as easily nudge persons toward the greater evil by effectively hitting on the right emotional nerves.

Putin is the ghost in the machine, using internet trolls and bots to wage his asymmetrical war on the West without even having to fire a conventional military shot. Along the way he has infiltrated our institutions and divulged military and foreign policy secrets through wikileaks and other social media sources.  You would be hard pressed to trace any of this hacking back to him personally, given how thoroughly insulated he is.

Obama came close.  He understood the long game Putin was playing but made the fatal mistake of calling check too early.  He hadn't had enough time to bolster his position by wooing countries away from Russia before an ill-fated election undermined everything.  Basically, Putin turned the table over and we still find ourselves scrambling to pick up the pieces.

Somehow we will get past Trump, past Putin and past all the vile nationalist sentiments being stirred up in Europe.  Democracy is remarkably resilient.  While everyone may want to rule the world,  it is better to not let our fears get the best of us, but rather think of what we can do to tame those fears.  As the Kinks once sang, Paranoia, they destroy ya!
Posted by James Ferguson at 12:29 PM