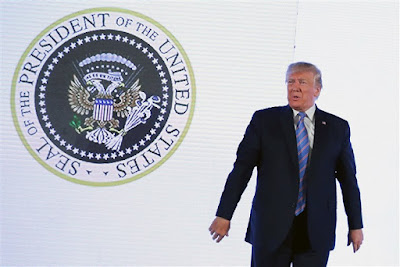 It didn't take long for viewers to see there was something amiss about the presidential seal behind Trump as he took the stage of a youth rally sponsored by Turning Point USA.  I thought it was an on-line joke, but it turns out the techie who was in charge for the screen presentation was either grossly incompetent, had his presentation hacked or is the ultimate troll.  Whatever the case, this is a moment neither Trump nor Turning Point will be able to live down for a long time, as the seal has now become the unofficial emblem of the Trump White House.

The creator of the satiric seal has become an internet celebrity.  When he created this image at the height of the 2016 campaign, he could never have imagined that one day Trump would stand before it.  He will have a hard time holding onto the rights of the design, as I'm sure it will be plastered all over t-shirts and caps in the days ahead.  It's the perfect emblem for a faux president who thinks he is king of the world.

Trump has really outdone himself in recent days, venting before a North Carolina audience and now a group of conservative teens, about all the imaginary threats in this world.  One of them turns out to be Sweden, whose police had the audacity to arrest A$AP Rocky for starting a fight in Stockholm.  So now Trump is leading the #FreeRocky movement from the White House.  He was very disappointed that PM Stefan Lofven wouldn't act on his request to let the rapper go.  It seems the new mantra of his foreign policy will be "treat Americans fairly."

Former Swedish PM Carl Bildt had a few words to say in response.  He hasn't had a chance to learn that there is no winning a rhetorical battle with @realDonaldTrump on twitter.  He will soon enough.

Meanwhile, A$AP is milking this new found attention for all its worth and when finally allowed to leave Sweden, I'm sure will be stopping by the White House to personally thank Trump, maybe even with his main man Kanye West in tow.  A$AP is an up-and-comer in the World of Rap, and was badly in need of some street cred.  Of all the places to find it.

This level of absurdity underscores the White House, which is why Kamala Harris took time to address the issue at the NAACP convention in Detroit.  She, unlike others, sees the misuse of presidential power, not to mention the shameless attempt to pander to the African-American community.  But, she has gotten more flack than Donald Trump for not rushing to the defense of her young countryman, as other Democratic presidential candidates have done.

The only video evidence we have of A$AP's presumed innocence are the videos he posted on Instagram, supporting his claim he was being taunted by two men before he slammed one to the ground.  If a similar incident had taken place in New York, I doubt Trump would be defending the rapper.

Sadly, this is the state our presidency has deteriorated to.  Trump will falsely accuse Ilhan Omar of sleeping with terrorists and her own brother at a NC rally, but will rush to the defense of A$AP Rocky because Kanye and Kim interceded on his behalf, showing how easily he can be pulled in any direction.  What kind of mixed signal does this send to the African-American community in our country, or all Americans for that matter?  About the only purpose these twitter rages serve is to deflect attention from the real crimes being committed by this malevolent administration.  This is what Kanye and Kim or any American should be worried about, not A$AP Rocky, who is being treated by Swedish authorities much better than are the Central American migrants and asylum seekers in Trump's detention centers.