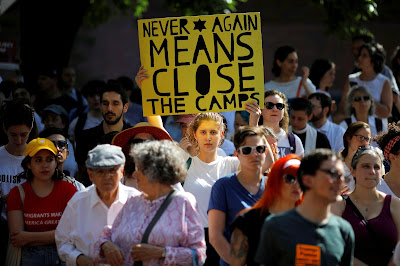 It takes a lot of chutzpah to use your Jewish identity to defend Trump's cages, but that's exactly what Little Stephen Miller did in an interview with Chris Wallace.  He flipped Alexandria Ocasio-Cortez's comments on the detention camps along the border into an attack on her, calling her allusion to concentration camps a "historical smear."  He claimed he was "profoundly outraged as a Jew."

Yet, he defended his President's malicious attacks on "the Squad," once again flipping the widespread criticism Trump received in the wake of his North Carolina rally into an attack on Democrats for trying to stifle free speech.  Wallace made attempts to counter Miller but to no avail.  It's like hitting tennis balls against a backstop.

Miller appears to be the dominant force in the Trump White House.  Trump supposedly went so far as to make him in charge of immigration when Kirstjen Nielsen resigned as Secretary of Homeland Security, no longer able to cope with the extralegal measures Trump wanted to impose on unwanted migrants and asylum seekers.  Miller has no qualms imposing such inhumane measures.  In fact, he was probably the one who suggested them.

At 33, he is two generations removed from the Holocaust, which he alluded to in his interview with Wallace.  If he knew his history, he would be aware that Jews were rounded up and placed in concentration camps long before war broke out in 1939.  The camps were a convenient place to lodge undesirables, get free labor out of them, and deter anyone else from speaking out against the state.

Given the similar rhetoric used by Trump, you get the feeling that Miller read Goebbels moreso than he has ever read the Torah.  Miller is very good at spinning words to appeal to the hardline conservative base of the Republican Party.  His interview was a prime example of this, as he torched the Squad by saying, "these four congresswomen detest America as it exists, as it is currently constructed."   What he meant by this is open to interpretation, but the message is clear, the Squad is a threat to state security.  As a result, they are being attacked viciously in conservative social media and receiving death threats.

While many Republican leaders have expressed their concern with the language being used by the Trump administration, few have publicly admonished him for it.  As long as Trump has the overwhelming support of the Republican base, Republican congresspersons will say little to detract from him.  Miller knows this, and it has become an effective weapon in keeping the Congressional Republican leadership quiet while Trump carries out his zero-tolerance immigration policy which does look an awful lot like the Nazi concentration camps of the 1930s.  Even Vice-President Mike Pence had to grimace by not saying anything when he visited one of the detention facilities, although he too admonished the mainstream media in calling them "concentration camps."

The big question is what Miller and/or Trump hopes to gain from these camps.  Regardless of whether you liken them to concentration camps, the unvarnished reports we have received are deeply unsettling, and will be used in the general election against Trump.  The conservative core at the heart of the Republican Party may support this immigration policy, but it has not been received well among the electorate as a whole.

Trump has backed himself into a corner on the detention facilities, and it will take a monumental effort in flipping the current perception of these "concentration camps" into an attack on the Democrats for being soft on border security, which it appears is what Stephen Miller is trying to do by saying the Squad wants "a socialist open-border country."

This too oddly reflects pre-war Germany, in which Hitler came to power over the fear that Communists would overtake the country following their strong showing in the 1932 elections.  Hitler's Nationalist Party only won 33 per cent of the vote, but being the majority in parliament was able to convince the Social Democrats and in turn the country of the threat of the Communist Party (which only won about 15 per cent of the vote) and form a coalition that made him Chancellor.  It took less than a year to dismantle the state government and declare himself Fuhrer, with control over all 661 seats of the Reichstag.  He quickly rounded up the Communist leaders and their collaborators and placed them in concentration camps like Dachau.

Stephen Miller is certainly playing on these same fears among the conservative base. By holding the base tight and casting doubts among moderates he hopes to repeat the same magic that led Trump to victory in 2016.

What's ironic is the way he used his Jewish identity as a means of attacking Alexandria-Ocasio-Cortez.  Many Jews have themselves likened the detention camps to concentration camps and are calling for them to be closed.  AOC is far from alone in her view that these detention camps are an ominous reminder of our racist past.