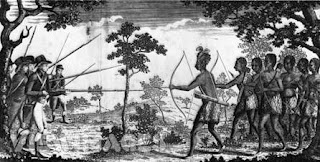 After a great start on Facing East from Indian Country, I've gotten bogged down in the middle chapter where  Dan Richter obsesses on Tears of Repentance, a narrative by John Elliot in which he tries to capture the confessions of the Christianized natives of Natick.  I think Richter tries a little too hard to read in between the lines of the confessionals provided by 15 former tribesmen who had professed their new faith in Christianity, but were having a hard time overcoming their sins.  Richter sees this as a classic clash of cultures, with the narrative being a rare attempt to capture the voices of the Indians themselves.

I enjoyed the earlier chapters much more as Richter delves into the mythology that has shrouded any real understanding of  the indigenous population before the arrival of English, Dutch and French settlers in North America.  He offers some very interesting interpretations on the folk legends of Pocahontas, Kateri Tekawitha and Metacomb, who inspired "King Philip's War" pictured above, showing in all three cases that their real stories have been for the most part misinterpreted.

In its own way, the book is a "re-imagining" of how native tribes might have felt by the intrusion of European settlers, as Richter readily admits there are few hard sources to draw upon.  But, Richter proves himself very adept at piecing together clues like an anthropologist, more so than an historian, offering a number of intriguing insights into indigenous life.

I was particularly intrigued by the native farming practices, particularly in Virginia, which grew corn, squash and beans together, rather than as separate crops.  Apparently, the squash leaves served to keep unwanted pests away, and the three foods blended together into a very healthy diet, supplemented by wild game.  It was the new settlers' obsession with monocultures that resulted in the intrusion of new pests, that infected the Indian crops as well.  Charles Mann also noted this in 1493.

Look forward to finishing the book once I get past this chapter on "Native Voices in a Colonial World,"   where local Naticks were forced to repent for sins they had a hard time understanding as sins.
Posted by James Ferguson at 1:04 PM