Making slaves of us all 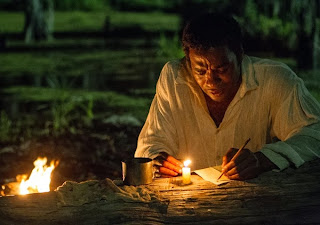 12 Years a Slave sounds like an enormously big undertaking for Steve McQueen, mining American history and pulling out of it a searing tale of slavery as told by Solomon Northup.  McQueen's film was a big success in Europe and has received rave reviews in its American premiere.

Unlike Tarrantino's pulpy Django Unchained, this isn't "grindhouse" fiction, but a true story laid out bare on the screen that has made audiences wince with pain.  McQueen's roots are in the British West Indies, so for him this is a story close to home.  Not something to be triffled with.

I've always liked Chiwetel Ejiofor, and this appears to be his breakthrough role.  McQueen also introduces a Kenyan actress, Lupita Nyong'o, as a young slave girl sadistically tortured by her master, played by the ever-compelling Michael Fassbender. The only tip of the hat to Hollywood is Brad Pitt pitching up at the end to save the day, but it doesn't seem like McQueen is content with a happy ending.