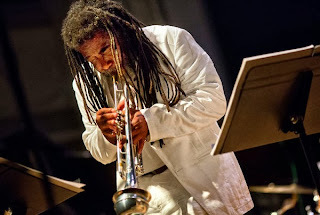 I've been listening to Wadada Leo Smith's breathtaking tribute to the Civil Rights movement in Ten Freedom Summers, recalling the years 1954-64.  It is a fantastic opus from a man who was part of the movement and has contributed greatly to the body of jazz music.  There is an air of improvisation in these compositions, and I imagine don't sound quite the same way twice on stage, but you can listen to them at Grooveshark.