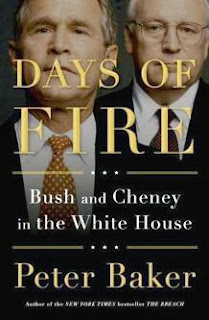 Hard to tell from this review in the New York Times how deep Days of Fire goes into the relationship between Bush and Cheney.  This appears to be the cornerstone of Peter Baker's 800+ page telling of the House of Bush.

David Frum's point that Bush was "his own man" is more likely his own than that of Baker, although he references a quote from the book made by a lifelong friend of Bush.  The consensus opinion is that Bush relied heavily on Cheney and Rumsfeld in his first term, but when things started to come undone in the second term, he reached out to other advisers, notably Condi Rice.  Cheney's deteriorating health no doubt contributed to this.  Rumsfeld was forced out of the administration, with Robert Gates coming in as the "clean-up" man.

I'm sure Peter Baker goes into all this in copious detail, which should make for an interesting read for those so inclined.  Baker covered the White House throughout the eight years, and had access to all the key participants including Bush and Cheney.  Frum credits Baker's "dispassionate" view of the administration.  Maybe that's a good thing, as the book might reach beyond the ideological divide.