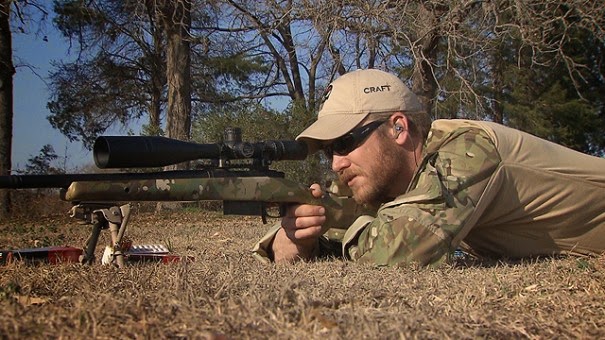 I hadn't given much thought to the story of Chris Kyle until I saw some of the anger being vented over the recent decision to award Jesse Ventura $1.8 million in a defamation lawsuit against the estate of Chris Kyle.  Many felt that Ventura should have dropped the lawsuit when Kyle was shot and killed at a shooting range in Texas last February.  Instead, Jesse proceeded, naming Kyle's wife in the lawsuit, since she was now the executor of his estate.  This seems to be what has galled most people.  Not only is Chris Kyle considered a genuine American hero, but the gall of Ventura to go after his wife!

The death of Kyle was indeed tragic.  Nicholas Schmidle tries to make sense of it in this article for the New Yorker, published in June of last year. After a lengthy piece on Kyle and how he came to be regarded as a live action hero, Schmidle uses the second half of the article to explore Eddie Ray Routh's troubled psyche and how it proved fatal to Chris Kyle, who thought he was helping the young former Marine out by taking him to a shooting range to "blow off steam."

It seems Kyle never bothered to explore Post Traumatic Stress Syndrome (PTSD) in any depth.  He, like many Navy Seals, felt he was immune to it, or at least better able to cope with it than any other soldiers.  He didn't need some shrink to ease him back into civilian life.  After all, he was wanted, not only by his wife and children, but by others who were more than willing to further his career.

He got the starter money to begin Craft International from his book deal.  The company specializes in training federal, state and local law enforcement in combat techniques, or "turnkey mission solutions" as the website calls it.  He had also served as a personal body guard to Sarah Palin, was known as an ardent supporter of the second amendment, and offered numerous paid speaking engagements.  He even appeared in a reality show, "Stars Earn Stripes" where celebrities, including Todd Palin, get a chance to show their mettle along side combat heroes.

However, Kyle is probably best known for taking out "Mr. Scruff Face," who he later identified as Jesse Ventura on the O'Reilly Factor.  Kyle claims that Ventura was trash talking the war in Iraq, then President Bush and his elite Navy Seals at an Irish pub in Coronado, California, a favorite hangout for former Seals.  Ventura is a former Seal himself.  Underwater Demolition Team (UDT) actually, the Vietnam War forerunner to the Seals.  Kyle depicted this scene in this book along with other questionable scenes, which Schmidle noted, that seemed to serve no other purpose than inflating his image as the "Punisher," his favorite comic book character.

All this proved irresistible to a conservative audience who revels in such live action figures.  The book has sold over a million copies.  Bradley Cooper bought the movie rights and plans to star as Kyle, with none other than Clint Eastwood as director.

Pretty hard for Ventura to compete against this kind of celebrity, but it seems that Kyle used the alleged 2006 bar fight as a way to gain entry, telling the story long before he published it.  Ventura had fallen out of favor with the Right Wing conservatives over his comments on the Iraq War, and who better to fill the void than a brash young Navy Seal with 160 confirmed kills, America's deadliest sniper.  Kyle was a living, breathing Pat Tillman and no doubt could have ascended great heights in the Republican Party, which he actively subscribed to.  Schmidle points to the incongruities in this narrative, notably Kyle's tendency to invent stories to suit his purposes.  This very much seemed to be the case with the bar fight, as the civil jury ruled in Ventura's favor, and also found that the chapter should be clipped from the book.

However, the much more compelling story is that of Eddie Ray Routh, who like many returning veterans, suffered terribly from PTSD and needed professional help.  His mother thought Chris Kyle could help her son out since the former Seal had made it his cause to help troubled vets make the transition into civilian life. This was after she felt her son didn't get the attention he needed from the VA.  Kyle may have had his heart in the right place, but he clearly underestimated the dangerous effects of PTSD, as has the VA.   Kyle himself wasn't able to fully subdue the symptoms of PTSD himself, as his wife related to Schmidle.  These vets can be walking time bombs, which Kyle and his friend Chad Littlefield found out on February 2, 2013.

Chris Kyle was given a send-off fit for a war hero with the Palins, Randy Travis and other leading conservative lights on hand for his memorial at Dallas Stadium.  Meanwhile, Eddie Ray Routh remains in jail awaiting trial over a year after the incident took place.  The troubled young vet faces possible execution, although more likely he will be consigned to a psychiatric ward, as the court is having a very hard time coming to terms with his rambling confession.

It is tragic.  Chris Kyle certainly didn't deserve this fate.  At the same time, he was no superhero, although he has already been bronzed and put on display in at the Navy UDT-SEAL Museum in Fort Pierce, Florida.