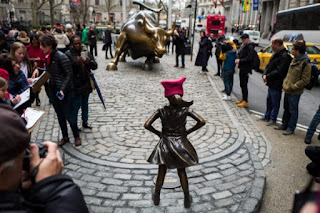 A Day Without a Woman sounds like the title of a campy science fiction movie from the 60s, but it was an attempt to show the world how important women are in the work force.  Unfortunately, it didn't gain the kind of groundswell the March on Washington and its sister marches did, and left some women wondering if this was more about privilege, as many women couldn't afford to take the risk of striking against their employers.

Nevertheless, the general strike created plenty of photo opportunities, keeping the issues of equal pay and health care in the public light.  On the same day, the little tiny country of Iceland, with the highest representation of women in parliament, went one step further by passing legislation that forces businesses to prove they are paying genders equally.  Little chance of that here in the US.  Most states have equal pay laws but they go largely unenforced.

Politicians pay lip service to the idea of equal pay.  Even His Trumpness tweeted how much he respects women.  It's the kind of patronizing attitude many women are rebelling against, but unfortunately just as many women seem to accept the status quo.  How else to explain that 54 per cent of white women voted for Trump?   So, yes, it is a matter of privilege, but not quite the way news pundits are presenting it.

This is why the attempt to evoke Lysistrata failed.  Unless you can get the overwhelming majority of women on board, these kinds of protests are doomed, and usually end up working against women in the collective American mind.

The news media loves presenting the women's movement as fanatical.  Some years ago, Rush Limbaugh coined the term "Feminazi" and it has stuck.  It didn't help matters when the organizers of the Women's March on Washington turned a cold shoulder to pro-life feminists, which was heavily reported in the conservative press.  Many pro-life feminists turned out for the march just the same, as they feel the issue of feminism is much broader than choice, which has been at the center of the movement ever since the 1973 Roe v. Wade decision.  However, it is not likely that the National Organization of Women will bend on this issue.

That's exactly how conservative politicians want it.  They know there is a lot of sympathy for a number of issues the feminist movement promotes, but as long as these politicians can create a divide over the issue of abortion they can effectively splinter this movement.  This has been the case in party politics as well, and why less than half of white women voted for Hillary in November.

You'd be hard pressed to find a woman who doesn't support equal pay for equal work, which was what this "strike" was about.  However, the stigma of "feminism" keeps many women from showing their support in public.  So, it seems a greater grass roots effort is necessary to make more women feel comfortable with such a "movement."

A greater awareness of the discrepancies needs to be shown, and this means reaching out to men as well.  The value of a woman goes far beyond equal pay and to the way she is treated in the work force.  Too many companies objectify women.  Not just restaurants like Hooters but throughout the workforce and especially in the entertainment industry.   Not much has changed since the images Mad Men and Masters of Sex presented of the late 1950s.

Women may have greater access today but it comes at a price.  They are constantly being graded not just for their ability but for their looks, and are expected to remain "feminine."  The double standard is nowhere more apparent than in sports, where lady tennis players are still required to wear skirts in most tournaments.  The internet is filled with images of nubile young women athletes constantly being graded for their looks.  When women come across as too masculine they are often "shamed," as has been the case with Serena Williams throughout her long illustrious career.  This is just as true in everyday life, which is how we end up with terms like "bulldyke."

For these and many other reasons, the women's movement needs to be taken to a much broader level, not continue to be narrowly defined by spokespersons and pundits, whether from the left or right of the political spectrum.  The situation at Fox was a valuable "teaching moment" but now seems largely lost because the news media has gone right back to the same old double standards.  Maybe what we need is a day without the objectification of women, reminding us that women are a valuable part of our life at every level.