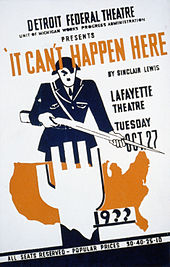 Last year Tony Toccone and Lisa Petersen adapted Sinclair Lewis' 1935 novel, It Can't Happen Here, into a play at the Berkeley Repertory Theatre.  They avoided updating the setting to reflect the ongoing election, preferring to stay in the Depression era when fascism was a palpable threat.  Lewis had teamed up with John C. Moffitt to first stage the book in 1936.

Since the rise of Trump, many periodicals have called attention to the novel.  However, critics then saw Lewis' principal inspiration as being Huey Long, who was toying with the idea of a run for President before being assassinated the same year.  Lewis certainly gave "Buzz" Windrip a down-home feeling, but he was projecting the rise of autocratism in Europe on America.

Oddly enough it was Roosevelt who took on an authoritarian air after his victory in 1936, as he tried to stack the Supreme Court in 1937 to obtain favorable rulings on his New Deal legislation.   Congress blocked these efforts, dealing the President one of his biggest blows in office.

For these reasons and others, I thought it would be fun to revisit the book and draw our own conclusions.  All readers are welcome.  Please feel free to comment.

Posted by James Ferguson at 3:00 PM