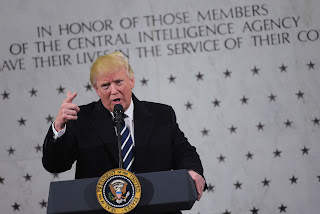 His Trumpness has tried to imply there is a silent coup going on, pinning much of the blame on the former Obama administration.  Spicey in a March 21 press conference sent everyone googling the term "Ramspecking," claiming the Obama administration had planted moles in bureaucratic positions who are now thwarting Trump's agenda by leaking information to the public.  The Ramspeck Act, which he was referring to, expired in 1997 and has not been renewed, so it would be illegal for Obama or any president to do this.  But, of course that doesn't stop this administration from slinging wild accusations.

However, the idea of a "deep state" has been around for a long time, although such conspiracy theories usually refer to the national security departments teaming together or working independently to push their own agenda counter to that of the President.  This season's Homeland is exploring just such a "deep state" during the transition of one president to the next.

The creators of Homeland have gone to great lengths to link elements within the CIA to right-wing movements that want to see a certain agenda pushed in foreign policy.  When a President doesn't go along with that agenda, they will use whatever means at their disposal to force her (in this case) to stick with the game plan or face ruthless consequences.  It's not a big stretch as the CIA long used these tactics in third world countries, even taking out foreign leaders if necessary.  So-called Black Ops are still in use, although seem to be subcontracted to private companies these days to avoid incrimination, which Homeland also explores.

All this got me thinking what would the CIA or other national security agencies do if they didn't like the way an election was turning out?  For the better part of four years we saw what could only be described as a hit job on Hillary in regard to Benghazi to undermine her credibility as a Presidential candidate.  This eventually led to the e-mail scandal that was dragged through the campaign and many believe proved to be her ultimate downfall when FBI director Comey revived it in an October surprise statement.

I don't think the national security agencies were too excited about the idea of a Trump presidency, especially after some of the things he said on the campaign trail, but they might have felt they had enough dirt on him to keep him in line, and if not they could always expose him when necessary.  For whatever reason, Hillary Clinton was seen as a threat to their autonomy.

The investigation into alleged Russian hacking of the DNC headquarters was launched by the Obama administration back in July, 2016, but didn't gain much traction in the media because of the flood of e-mails that ensued.  Julian Assange adamantly denied Russia provided him this information, but his links to the Russian sponsored news program RT call his assertion into question.  After the election, the FBI expanded their investigation into possible election tampering and the links Trump campaign managers and advisers had with Russian officials and surrogates.

Trump felt he was partially vindicated by the message Devin Nunes relayed to him that some of his campaign advisers had been subject to incidental surveillance as a result of the FBI probe, but his "source" apparently came from the White House grounds the night before.  This "Deep Throat" may very well be Stephen Bannon or Miller hoping to cast shade on the investigation.

Others feel Comey has become the latest incarnation of J. Edgar Hoover, who was notorious for keeping files on politicians, which he could use against them if his authority was challenged.  This in itself implies a deep state where persons within the labyrinthine national security apparatus can secure their place in government for a very long time.  They don't need the Rampseck Act and can pretty much maintain their autonomy under any presidential administration.

Not surprisingly, the Trump administration would prefer to keep on reasonably good terms with the FBI and CIA, so it makes the former Obama administration its punching bag.  It's one thing to take down a Presidential hopeful like Hillary, but quite another to tarnish the reputation of the White House, which national security departments would like to keep intact.  After all, these same agencies worked with Obama for eight years and were pretty much able to maintain their influential role.  Who is Trump to call this special relationship into question?

His volatility is a major concern, not just because of our relationship with traditional allies, which his administration recently called into question, but for his casual handling of confidential information as witnessed at Mar-a-Lago where he shared sensitive material with the Japanese prime minister in an "open-air situation room."  As a result we are seeing more and more incriminating information being leaked as to Trump's Russian connections.

He doesn't seem to be taking the hint.  He has doubled and tripled and even quadrupled down on his absurd accusations of wiretapping.  Reince Priebus dismissed FBI director Comey's appraisal of the situation in an interview with Chris Wallace.  And, Spicey keeps pressing the issue in daily briefings.  This can't sit well with the FBI or any other national security agency.

The national security network has a president-in-waiting in Mike Pence, who is much more discreet in his demeanor.  It seems to be only a matter of time before they force Congress to take action against Trump.  The only question is whether His Trumpness will quietly abdicate his presumptive throne or if he makes an even bigger stink out of the situation.  I guess it all depends on how the right-wing media reacts, as they are not one to turn their backs on a juicy conspiracy theory.

Maybe I've just been watching too much Homeland, but it seems Trump has drifted into the deep end of the pool.  It's just a matter of whether he will be able to keep his head above water or find out the hard way just how deep this "deep state" really is?
Posted by James Ferguson at 11:30 AM