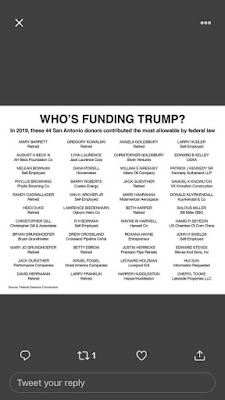 It seems there are a lot of Trump supporters who don't like wearing their red caps of courage.  They prefer to keep their contributions to his campaign quiet, as we found out when Joaquin Castro "doxed" prominent contributors in his district.  Political contributions are a matter of public record, so Castro didn't really dox these persons, but he did call greater public attention to them, and Republicans didn't like this.

Armie Hammer similarly called out the head of the television wing of Marvel for supporting Trump, suggesting fans should boycott the highly popular movie and television franchise.  This follows on the heals of the owner of popular fitness centers, Equinox and Soul Cycle, being called out as a Trumper, which Trump himself joked about at a Hamptons campaign fundraiser.

House Republican minority leader Kevin McCarthy called it McCarthyism.  Not him of course, but that infamous "tail gunner" from the 1950s who liked to call out communists, and still has his ardent fans.  Little Kevin would never be so bold.  He, like many Republicans today, prefers to lurk in the shadows hoping this whole thing with Trump will blow over and they can return to their business of quietly undermining the social welfare system in this country.

Many conservatives like to think of themselves as libertarians.  They believe the social welfare system is a communist plot perpetuated by radical liberals like Saul Alinsky, and that Americans would be better off with an unbridled free market.   The best government is no government.  It's why Ayn Rand is so popular among conservatives these days.

The problem is most conservatives don't read, so they don't know who Alinsky or Rand is.  They glean these names from the Internet.  About the only thing you can coax them to listen to for more than five minutes is Fox News because it is so damn entertaining.  This is why memes have become the favorite form of communication.

It's not just the Russian troll farms, but Project Alamo and a whole host of other conservative digital information sites that like to collect your profile information and direct memes expressly tailored toward your political biases to your timelines.  It's this kind of subterfuge that conservatives today have become very good at.  It only works if you can remain in the shadows, which is why Little Kevin got so worked about conservative donors being called out.  Clandestine information gathering costs money, and conservative political action committees invest heavily in these projects.

We once thought we had a certain measure of privacy on the Internet, but not anymore.  Pretty much everything we do on the Internet is immediately available to anyone who wants to exploit that information.  Facebook, Twitter and other social media giants aren't keeping your personal information under lock and key.  They readily supply it to the highest bidder, as we found out with Cambridge Analytica.  You don't collect 80 million facebook profiles without someone in the organization being aware of what is going on, and that person is Mark Zuckerberg.

FB does nothing about it because their entire marketing model is built on selling information.  This is why advertisers love facebook.  They too can target their ads specifically toward your profile.  In fact it is this advertising model that became a political model, just like Zuckerberg cribbed his idea of a vast social network from amazon, which was the first large website to allow its patrons the ability to engage with each other on its platform in much the same way.

The beauty of this information gathering is that it can be done quietly with no one the wiser for what is going on.  However, when this blew up into an epic scandal,  persons began demanding greater privacy on the Internet.  We don't want our information falling into the wrong hands.

To this point, social media networks have been able to have it both ways.  They can freely collect your information, but it is very difficult for the user to control where that information goes.  Worse, it is virtually impossible, as David Carroll found out in his suit against Cambridge Analytica, to get that information back.  CA declared bankruptcy before having to expose its vast database.

I can understand why high profile San Antonians wouldn't be so keen to be called out in their support of Trump, but it is precisely the Trump campaign that actively used Project Alamo, CA and other digital information harvesters to effectively target key voters and swing the election in its favor. Team Trump used a vast array of misinformation to influence unsuspecting persons who were sitting on the fence in that election.  These frustrated voters didn't know they were part of an Orwellian social experiment first carried out in developing countries like Trinidad and Tobago.  For their part, these donors were probably not aware of it either.  Nevertheless, this is where their money went.

Misinformation has become the cornerstone of the Republican campaign strategy.  It began cleverly enough by twisting facts to suit their arguments, but now we see blatant falsehoods being peddled on the news and social media.  The other night, I heard a member of Republicans Abroad tell CNN host Bianca Nobilo that more than half of Americans own guns and that automobile deaths vastly exceed firearms deaths.  Both statements are demonstrably false but Nobilo, a British journalist filling in for Hala Gorani, failed to pick up on it.   The amazing part of this segment is that the man had no qualifications at all.  He was simply a Republican expat in London providing terribly misleading information in an effort to downplay the gun violence in America.

This is why Joaquin Castro and other Democratic politicians are also furious.  They are unable to get any gun control legislation through Congress because Republicans block them at every turn.  The same Republicans supported by the donors that Castro tweeted.  This goes beyond Trump, but to a political party that has blocked any meaningful gun control legislation since 2003, when they retook the House of Representatives and allowed the Assault Weapons Ban to expire in 2004.  Since then we have seen a vast number of states delimit gun control and promote open carry laws that allow persons to brandish loaded semi-automatic weapons in public.  These donors deserve to be outed!

Less than one-third of Americans own guns, a fact pointed out by CNN no less.  The vast majority of firearms are concentrated in very few hands.  Three per cent of Americans own nearly half of the 390 million guns in circulation in this country.  That's 10 million persons with approximately 195 million firearms, or roughly 20 guns per individual.  Ask yourself why we should give these persons so much political sway in our country, to the point kids are wearing bulletproof backpacks to schools, which now provide lockdown rooms in case of mass shooters?

No other developed country in the world has this kind of problem.  Even war-torn countries like Iraq and Afghanistan have a lower homicide rate than the US, and virtually no school shootings.  It is utterly appalling, yet conservative donors keep contributing to Republican campaigns but want their communities to think they care.

Kudos to Joaquin Castro and Armie Hammer.  Conservative donors and their spineless political surrogates shouldn't be allow to operate in the shadows.  We need to rat them out, and let everyone see the hypocrisy that lies behind their empty rhetoric.  Thoughts and prayers no longer count.  Not that they ever did.  We have to take back our schools, malls and public spaces, and that begins by shaming the very persons who have allowed for a gun culture to flourish in this country and take so many innocent lives.