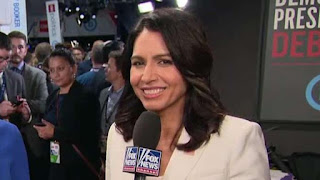 I didn't pay much attention to Tulsi Gabbard until after the second Democratic debate.  She has  since become the darling of the conservative media, having won over Tucker Carlson, Meghan McCain and many others for openly clashing with her Democratic rivals and claiming she has been frozen out of the third debate.  Gabbard hasn't fared so well among liberal political pundits and comedians.

The Hawaiian US representative has taken some odd positions, notably her support of Assad in Syria, which has led many to wonder who she represents exactly?  This is the same guy Putin has been propping up ever since Obama drew his infamous red line in the sand.  Assad continues to use chemical weapons to this day.

Gabbard has drawn the most attention from conservatives.  She has done very poorly in generating support among the Democratic base, and failed to qualify for the September debate.  She's not alone.  Marianne Williamson also failed to reach the prescribed benchmark for participation and will have to sit this one out as well.  Their campaigns are all but dead because they simply don't appeal to Democratic voters.

This leads to an interesting quandary for Gabbard, should I stay or should I go?  She was a longshot candidate to begin with and now that we have learned more about her Libertarian views, she doesn't seem to fit the party at all.  The Libertarians are hoping to make inroads into the Democratic Party.  They had a lot of success with Ron Paul in the Republican Party a few years back, who left his son Rand to keep sowing discord.  These guys basically want to take down government as we know it.

The Libertarians have long served as "useful idiots" for Putin, especially in regard to their rejection of US foreign policy in Central Asia and the Middle East.  Gabbard believes her one-year stint in Iraq makes her an expert on the subject.  In her mind, Assad is not an enemy of the American people so we should leave him alone.  It's the kind of dangerous simplistic thinking that abounds in the Libertarian mind, and which Putin readily exploits.

One can argue, as Noam Chomsky has done, that our foreign policy has failed, but even he feels the US should stay in Syria if for no other reason than to protect the Kurds.  Unlike Tulsi, he sees all the forces at work in the region, not just the US and Russia.  He is equally appalled by the way Turkey has historically treated the Kurds, and without a counter balance the Turks may very well carry out another genocide on the Kurds.  He also has no sympathy for the Assad regime, whose authoritarian rule has dated back two generations.

Tulsi appears to be in the race for no other reason than to break someone's leg.  She successfully did this to Kamala Harris in the second debate.  I suppose turn about is fair play after Kamala blindsided Joe Biden in the first debate on busing, but Tulsi made it look purely like an act of retaliation as if she was angling for the number two spot on Joe Biden's ticket.  In that sense, it was a lot like what Chris Christie did to Marco Rubio in the lead up the New Hampshire primary in 2016, apparently for no other reason than to endear himself to Trump, as Christie dropped out soon thereafter.  Kamala Harris is still hobbled, but unlike Tulsi has qualified for the third debate, sitting a distant fourth in the polls.

Endearing herself to no one in the liberal media, Tulsi now turns to the conservative media to air her grievances.  She seems more comfortable on the Tucker Carlson show than on a Democratic stage.  I wouldn't be surprised at all to see her pitch up at the Republican National Convention next summer, endorsing Trump, especially if Kamala bounces back to take the Democratic nomination.  No love lost between these two.  Of course, Tulsi would put her own House seat in jeopardy, but then she can earn a place at the White House table, should god forbid Trump be re-elected.  If not, she can always go on Fox, where I'm sure she would be warmly welcomed.