Friends, you are going to love Greenland 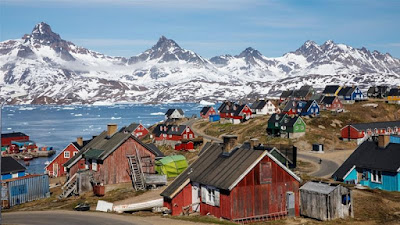 I was half listening to the Lithuanian news when I heard Trump, Greenland and Denmark come up.  That was an odd combination of words, so I listened more intently.  I tried to make out what the anchorman was saying and as near as I could figure Trump was wanting to buy Greenland for 15 billion dollars.  This seemed too absurd even for Trump, so I googled this crazy notion and sure enough Trump had apparently floated the idea at a West Virginia rally.

The transcript read like parody.  There's no date on the rally.  Trump has frequently visited West Virginia since assuming office, heralding the state as one of his great economic successes, although you would be hard pressed to find much corroboration for these claims.  A voice search proved fruitless.  The story originally appeared in the Wall Street Journal and spread like wildfire with other periodicals taking liberties with the text.

The idea has apparently been floated in the White House with some of his advisers supporting the purchase.  I rapidly melting ice cap has made Greenland prime real estate, rich in mineral resources, notably oil.  But, the reactions of both the Prime Minister of Greenland and Denmark firmly suggest no such deal is even being entertained.  Danish PM Mette Frederiksen said, "may God deliver us from this delusional maniac."

This isn't the first time the idea has been broached.  Turns out Truman had his beady little eyes on Greenland after WWII.  Before that, Andrew Johnson thought about buying Greenland and Iceland in 1867.  The glacial island has long been seen as strategically important as far as military defense goes, and even moreso now with Russia flexing its muscles in the Arctic Circle.  So far, Denmark hasn't shown any interest in selling the island to the US or any other country.

The WSJ article points out that Trump has yet to bring Greenland up at a campaign rally, so the transcript does indeed appear to be bogus.  Someone having fun with Trumpspeak.  Nevertheless, this appears to be something the White House wants to have out there if for no other reason than to serve as a distraction.

It is increasingly hard from one day to the next to figure out what is going on in the Trump White House.  He appears to be bouncing off the walls, looking for anything to give him a boost in the polls.  He has flatlined at 42 per cent, a number that he has been stuck at since May of last year, if we are to take 538 as our gauge.   His once favorite news channel gives him only one extra percentage point, which helps explain why he has been so negative toward Fox lately.

His constant bellyaching does draw attention away from the other candidates.  All the news channels pick up on his neverending stream of tweets, making it hard for any other candidate to get a word in edgewise, even prominent candidates like Biden, Warren, Sanders and Harris.  When they do, it is usually in response to something Trump has tweeted, like his recent support of an Israeli travel ban on two US congresswomen, which Trump apparently initiated when he heard the two were planning on visiting Palestine.  Essentially, the Democrats continually get dragged into Trump's rabbit hole.

This is true of Greenland as well.  Such a purchase, if it were real, would have to be approved not only by Denmark, but by our Congress.  It is doubtful there are very many congresspersons, Republican or Democrat, who would go along with such a hare-brained idea.  Just the same, he has everyone talking about it.  End result, we don't talk about climate change, which is a serious issue in Greenland.  Or, the fact that this administration continues to gut environmental regulations which only makes matters worse not only in Greenland, but also Alaska, which has been experiencing a record heat wave this summer.

Trump may indeed be the master of obfuscation, which Rachel Maddow seems to think, but more likely these ideas are being fed to him by smarmy advisers like Stephen Miller, who better know how to manipulate the press.  Trump is just the image on the screen.  It is doubtful he has any awareness what he is talking about, which is why it is easy to believe he actually said all that crazy stuff about Greenland at a political rally in West Virginia.

We just need to find a way to not let ourselves get sucked down these rabbit holes or we end up like the poor folks in Jordan Peele's Us.