Goes to Alabama with a Banjo on his Knee 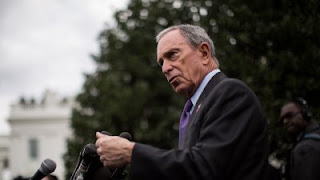 The former Mayor of the Big Apple has filed his papers in Alabama, officially throwing his hat in the Democratic primaries.  It comes as a bit of surprise as Mayor Bloom seemed content to sit this race out, but the idea of a wealth tax got under his skin, as it has many other rich so-called Democrats who think Liz Warren has gone too far with her proposed taxes.  Bill Microsoft similarly spoke out against Liz's extreme measures to fund Medicare for All.

Bloomberg and Gates are not like other billionaires.  While Bill Microsoft pours billions into fighting tuberculosis in Africa, Mayor Bloom has been a big environmental advocate.  These are genuinely good deeds, but then they didn't reach this stage in life by not climbing over the backs of others.  The irony of Gates' critique is that tech giants like Microsoft have done more to stifle start-ups than any new tax would.  In fact, the current tax codes are expressly designed to bolster companies like his. Bill and Michael epitomize the billionaires hoping to leave a positive legacy to their names, similar to robber barons Andrew Carnegie and J.P. Morgan.  This is what differentiates them from Trump, who uses his charities to funnel money to himself.

However, Americans are tired of evangelical billionaires claiming to have the answers for everything, at least in the Democratic Party.  They want a man or woman of the people.  Someone who can identify with their pain.  Even Doddering Joe Biden understands this, although his campaign is worried Mayor Bloom might siphon voters away from him.

I can understand the consternation in Liz and Bernie having gone too far with their tax plans, but it is highly unlikely they would ever get such a wealth tax through Congress.  This is a pie-in-the-sky notion, much like Trump getting Mexico to fund his wall. At best, they can hope to roll back some of the tax cuts Republicans have provided over the last 20 years.

It's not like we don't deserve universal health care given the amount of money we put into Social Security and Medicare each year.  Most Americans are taxed 15 per cent on FICA, only to have to wait until 65 to collect it.  Developed countries provide universal health care from cradle to grave.  The problem in the US is that it would take years, if not decades, to institute a similar health program as our hospitals and pharmaceutical industry are mostly private and the government would have to exercise some means of financial control to keep costs down, otherwise it would take trillions upon trillions of dollars to fund universal health care.  Not even all of Bill Microsoft's or Mayor Bloom's or even Amazon Jeff's billions would cover it.

These pipedreams are great for political campaigns but do little to further the dialog in this country when it comes to managing health care or any other social service.  Of course, Mayor Bloom will try to run as a common sense candidate.  Maybe his billions will garner more attention than has Amy Klobuchar, who has presented herself as the sensible candidate, but right now it is hard to buck the yearning for a real game-changer.  Medicare for All, or M4A as Liz has abbreviated it, has a nice ring to it.

I would like to see a candidate offer a more sensible path toward universal heath coverage.  "Say It Isn't So" Joe and Mayor Pete have been pitching less audacious health coverage plans, along the lines of the current Affordable Care Act, but most Democratic candidates think the ACA doesn't go far enough, so these pleas have fallen largely on deaf ears.

The more audacious Liz and Bernie become, the more support they garner among the base of the party, especially the youth vote, which hasn't had time yet to learn how to balance a check book.  It's kind of odd when you think about it as they are both senior citizens.  They could retire and get Medicare for the remainder of their lives, yet they are out there pitching universal health care to everyone.  A noble gesture that hasn't gone unrewarded.

What can Mayor Bloom possibly have to offer?  Is he going to provide free subscriptions to Bloomberg News or use his billions to reduce carbon emissions or one of his other "data-driven" philanthropies?  It's not like he's a bad guy, but guys like him should be supporting candidates who represent their interests, not running for public office.  In the end this is another vanity project, which is not likely to yield him the Democratic nomination.  However, he may just be using the primaries to garner support for an independent run in the general election.  He and Tulsi Gabbard can share a ticket.