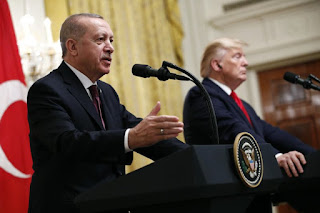 Safe to say that this meeting served one purpose and one purpose only -- to deflect attention away from the impeachment hearings that started yesterday.  Unfortunately for Trump, his press conference only served to highlight how he allowed himself to be played by Erdogan.

Republican lawmakers are having none of it. The House passed a bill placing sanctions on Turkey for their incursion into Syria by an overwhelming majority.  At least two-thirds of House Republicans signed onto the measure.  The House also voted overwhelmingly to recognize the Armenian genocide, which has long been a sore point with Turkey.

Moscow Mitch will probably sit on these bills as he has done so many other House bills.  He claims he doesn't want to antagonize a fellow NATO member, but Turkey has been the black sheep of the NATO family under the double-dealing Erdogan.  He has repeatedly played NATO off Russia, most recently in Syria, where he struck a deal with Putin on the northern region without any consultation with the US or NATO, which is why the House passed these sanctions.

Trump has been a horrible president in so many ways, but none worse than his foreign policy, which appears to be fed to him by Putin and Erdogan.  He repeatedly dismisses the concerns raised by his security council, goes out of his way to upset traditional allies, and openly courts highly dubious foreign fringe figures like Kim Jong-un and the Taliban.

To understand his foreign policy, you have to look at who he selected for The Celebrity Apprentice.  It was a virtual who's who of has-been television personalities, some of whom got a second lease on life thanks to their success on his show.  He loved controversial figures because they boosted television ratings.  This is what makes it so difficult for Trump's security council to work with him, as he is driven not by security issues but by ratings.  A high profile meeting with the North Korean tyrant will draw a big television audience, which is what he craves.

Not liking the media attention he is getting from the House impeachment hearings, he invites Erdogan to the White House to "clear the air," and hopefully show skeptic Senate Republicans that he really did have America's best interests at heart. The select handful of Senators didn't come away pleased by what they heard, but as always are willing to give Trump the benefit of the doubt.

Erdogan made no effort to disguise his intent.  He wants to clear Northern Syria of Kurds, which he regards as a threat to Turkish national security.  He openly stated that he sees all Kurdish military forces as terrorist organizations.  There was absolutely no contrition on his part for the atrocities he committed in the region after Trump chose to pull US troops out of Tal Tamr.

This raises the very serious concern that Trump only did this withdrawal as a favor to Erdogan.  Many see this as another example of "quid pro quo," regarding his real estate investments in Turkey.   Hosting this meeting in Washington highlights Trump's style of "pay to play," which has characterized both his real estate and entertainment industries that are intimately connected.

The same goes for Russia, where Trump hosted international beauty pageants and tried to get one of his signature towers built in Moscow, which came up during the hearings surrounding Michael Cohen.  Trump's former lawyer outlined the repeated attempts to get Moscow to give the project the green light, which included phone calls with top Kremlin advisor Dmitry Peskov, who overseas the large propaganda arm of Putin's government.  Cohen was apparently in charge of the "Moscow Project."  It is believed that during this time Russia was able to collect compromising information on Trump that made him vulnerable to influence -- a "useful idiot" if you will.

Garry Kasparov was on Amanpur & Co. recently noting how Putin looks at Trump as an asset, not a co-equal.  This is pretty amazing given that Trump oversees the greatest superpower in the world, and Putin is at best a far-distant second, if not a third or fourth.  As an economic force, Russia lags far behind the G7 countries, with a nominal GDP barely larger than that of South Korea.  The only thing Russia really has going for it is vast oil and mineral reserves, at least in terms of being a world player.  Yet, Putin very much appears to have Trump in the palm of his hand.

While Trump tried to strong arm Ukraine, it appears Russia and Turkey effectively strong armed Trump.  The US has ceased to be the major player in the Middle East.  That role effectively goes to Russia, Turkey and Saudi Arabia, which are exercising far greater influence in the region than is the US.  This not only worries Congress, but also Israel, who was as shocked as anybody to see the US reduce its role in Syria.

Trump has sent a clear message to our traditional allies that the US can no longer be trusted to have their backs.  This is what led Macron to opin that Europe should consider a joint defense force of its own, as he no longer feels NATO offers enough security.  It has also sent shock waves through the Eastern European countries, who well remember Yalta when FDR sold out the region to the Soviet Union.

It is time Republicans quit giving Trump the benefit of the doubt.  As George Conway very bluntly put it, Trump is only interested in saving himself.  He doesn't care about the GOP or the United States or anyone outside his nuclear family.  These impeachment hearings give us a small slice of the incredibly selfish nature of our President, who so desperately wants to remain in power that he would try to extort Ukraine to undermine a political opponent's candidacy.