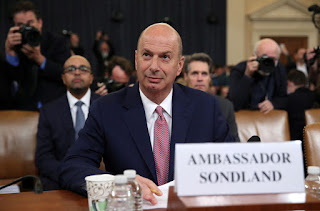 Gordon Sondland's testimony laid bare the corruption in the Trump White House.  This administration went out of its way to pressure the new Ukrainian president into giving them dirt on a political opponent.  Sondland presented a wide range of e-mails implicating all the major figures in Trump's cabinet, leaving virtually no one unscathed except maybe the clueless Ben Carson.

Of course, Sondland is no Mr. Nice Guy.  He played a role in all this backdoor double dealing by meeting with President Zelensky himself and presenting the Trump's administration's demands.  He and his White House contacts used the euphesmistic language one would expect from small-time mafia hoods, as if watching too many episodes of The Sopranos, but Sondland was kind enough to spell it all out for the impeachment panel, much to the chagrin of the Don, who was left stumbling for words on the White House lawn.

All in all, it was a black day for Trump and fellow Republicans.  His clowns in the House chose to defer to Elise Stefanik, a 35-year-old Congresswoman from New York who appears to be their answer to AOC.  Nunes tried to use her as a surrogate when attacking Marie Yovanovitch, but Adam Schiff was having none of it.

For the Republicans, it is all about denial, but it has reached the point where few doubt Trump is guilty of the crimes he is accused of (70 per cent). The only question is whether he should be impeached for them (51 per cent).

However, Sondland's testimony goes beyond the Ukraine incident and to the general rot in the White House.  This was a coordinated effort by multiple cabinet heads to pressure Ukraine to resurrect the Burisma case and try to find misdeeds by Hunter Biden that could be tied to his father Joe Biden.  They even went so far as to dredge up phony conspiracies to try to undermine the Mueller report, which Trump continuously harps upon in his tweets.  It wasn't just the nutcase Rudy Giuliani, which we were led to believe by the WH.  Pompeo, Perry, Mulvaney and even Pence all had a hand in it.  The only key person who apparently didn't sign onto this charade was John Bolton, who resigned when this "drug deal" came to light.

Republicans are doing their best to distance Trump from the extortion allegations, claiming he was a victim of others' machinations.  Much of the blame had been laid at Rick Perry's door step, who was trying to work out an energy deal with Ukraine and apparently suggested Zelensky show Trump some love.  Perry has since resigned, but Sondland made it clear that Perry was in on the action.

None of this frees Trump from responsibility.  Sondland also made sure of this by stating the President was fully aware of what was going on.  Trump's provided the canned retort that he doesn't even know Sondland.  Maybe met him once or twice.  It doesn't matter whether he personally knows Ambassador Sondland or Lt. Col. Vindman or Jennifer Williams or whoever.  They all testified that Trump was directly involved in the White House deal proposed to Zelensky that he reopen the Burisma case in exchange for military aid.

The way Trump treated Ukraine is a microcosm of his entire foreign policy.  He has personalized FP as no other president has done before.  This is largely due to his many foreign business interests.  Past presidents didn't come into office with this kind of baggage.  His deals with Turkey and Saudi Arabia are largely predicated on his personal business interests in these countries.  This is what makes him so vulnerable to foreign influence.  He thought he might reverse the scenario by using military aid to leverage a personal favor from Zelensky, the same way Erdogan and the notorious MBS have been leveraging him, but he got caught.  The guy he had negotiating the deal, Rudy Giuliani, was so inept that he left a trail for everyone to see, implicating numerous White House officials along the way.

We have not seen this level of corruption in the modern era.  Trump not only threatens to drag down himself but the standing of the country.  How can anyone trust the United States after the stunts he has pulled in office?  This is a pox he has left on America for years, if not decades, to come.

The sad part is that we all saw it coming.  The little dance he did in Riyadh should have been an early warning sign.  This is a guy who will sink to any level to negotiate a deal even if it means making a total fool of himself.  He even drug Wilbur and Rex into this crazy dance.  At least Rex Tillerson was smart enough to know when to get out before the shit really hit the fan.  I think Pompeo now deeply regrets taking the role of Secretary of State, a position he was grossly unqualified for.

What's worse is that Trump has drug the entire Republican Party into this mess.  Only a handful of high ranking Republicans are speaking out against him.  The rest actively defend him or cower in the corners hoping no one will take notice.

As for Gordon Sondland, he didn't pay a million dollars to Trump's inauguration fund only to go to jail.  He is doing his best to dig himself out of a hole that became euphemistically known as the "Gordon problem," which has now become the White House Problem.
Posted by James Ferguson at 4:16 PM