Mr. Gorbachev, Tear Down This Wall! 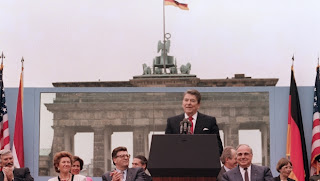 Much of Episode 8 of Oliver Stone's Untold History of the United States focuses on the relationship between Reagan and Gorbachev, highlighted by Reagan's famous speech at Brandenburg Gate in 1987.  Stone skips around a lot in this episode, following little chronological order, but he does provide an entry to the Reagan years through Ford's and Carter's failed administrations.

Of note was the Halloween Day Massacre which occurred in October 1975 when Ford purged his cabinet of moderates and brought Cheney and Rumsfeld on board.  Two figures who would come to haunt American politics.  In turn, Stone blames Brzezinski  for leading Carter down a dark alley on foreign policy by instigating the Soviet-Afghan War with support of counter-insurgency groups in Afghanistan who were antagonistic to the Soviet-backed government. 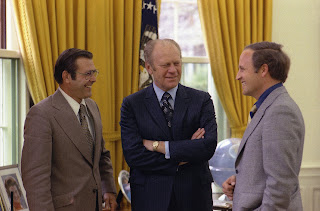 Ollie uses these incidents as a set-up for the heinous foreign policy set by Reagan, which was pushed by neo-conservative think tanks led by Richard Perle and religious leaders like Jerry Falwell, although surprisingly Stone doesn't talk much about the growing "moral majority" in the Republican ranks.  Instead, he notes a book by Claire Sterling, The Terror Network, which apparently had a profound influence on William Casey, who Stone credits as being Reagan's top foreign policy adviser.

Then comes a long laundry list of all the counter-insurgency efforts the US supported in Central America, with money and training funneled through the US Army School of the Americas at Ft. Benning, with additional training in Panama.  There is even a clip from Stone's film, Salvador, to highlight the terror supported by the US at this time.

For the most part, Stone is spot on with his allegations, but one is left to wonder why he adheres to this line that the Soviet Union was a minor player in all this, and that the US had essentially invented an "Evil Empire" as an excuse to build its massive military-industrial complex.  He even castigates Carter for increasing defense spending during his administration despite all his talk of promoting human rights abroad, blaming his administration for dragging the Soviet Union into a war in Afghanistan in 1980.  Much of the statistics Stone cites about Soviet arms came out after 1991.  During the Cold War the Soviet Union padded its numbers, essentially taunting the US into an Arms Race.  All part of the "realpolitik" established during the Truman years. 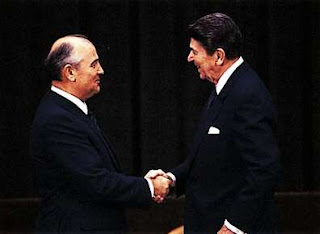 Stone sees Gorbacev as the Soviet Henry Wallace who ascended to power in 1985 and sued for peace with the US and complete nuclear disarmament in talks in Geneva and Reykjavik in 85 and 86.  Unfortunately, Reagan was too much guided by Richard Perle, and not the advice of Charles Schultz and Paul Nitze, to heed the call for disarmament, preferring to hold onto his "space fantasy," which purportedly killed the deal. Not surprisingly, Ollie gives Gorby all the credit for the breakdown of the wall, and views Reagan as a "befuddled old man" at the end of his tenure, which was mired in the Iran-Contra affair.

It will be interesting to see how Stone deals with Gorby in the subsequent episode, especially as he cracked down on independence movements in the Soviet Union, notably in Lithuania on January 13, 1991, while Bush prepared the US for battle in the Persian Gulf War.

One very salient point that Stone notes is that Reagan's 1987 veto of a bill that would have made the Fairness Doctrine law paved the way for right-wing media moguls like Rupert Murdoch and Roger Ailes, dramatically reshaping mainstream media in America. Ailes was one of Reagan's campaign consultants, noting that broad "themes," not details won elections.
Posted by James Ferguson at 11:51 AM