Don't Fence Me In 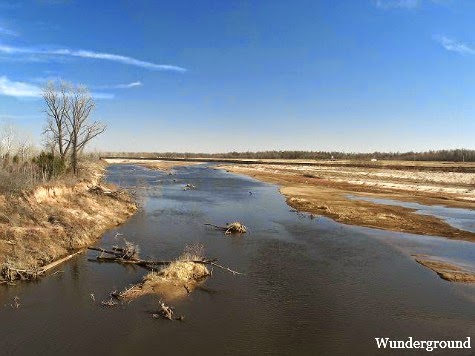 I'm reminded of the line, "Oh, give me land, lots of land under starry skies above, don't fence me in," as Greg Abbott tries to carry the stick of Cliven Bundy over a faux battle for 140 acres of land along the Oklahoma-Texas border.

Apparently, Wendy is gaining some ground in the Texas governor's race, although she is still 12 points behind.  I guess this is too close for "Wheels."  Why else would Abbott make hay over what could best be described as silt and cottonwood trees along the Red River?  Of course, the conservative hell hounds at Breitbart Texas have blown the "land grab" up to 90,000 acres along a 116 mile stretch of the river, evoking the cattle call of Bundy.

The dispute goes back to 1986 but the bad guys are "Obama's BLM," because naturally everything that is bad in this world can be directly linked to our current POTUS.  Abbott is hoping that he can rally Texans around the Gonzales flag of 1835.  I guess he needed something to counteract the success of Obamacare, as Southern Republicans now find themselves on the defensive in their assault on the Affordable Care Act.

However, as Peter Weber notes in his article in The Week, this isn't a smart move.  The Lone Star State hasn't exactly been kind to private land owners over the years.  Abbott was involved in the eviction of a fundamentalist branch of the Church of Latter Day Saints still practicing polygamy in West Texas.  The state claimed the 1700-acre ranch after the leader was convicted of pedophile charges.  Abbott has also used eminent domain to help secure land for oil companies, and taken landowners to court who refused to yield to these greater Texas interests. 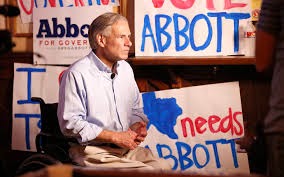 Instead of sounding like a tough guy, Abbott sounds more like a whining coyote looking to deflect attention away from a notorious track record that Wendy Davis has been airing out on the campaign trail.  With 6 months left to stump, there is plenty of time to turn 12 per cent of the vote around, especially since many are still undecided with Abbott barely edging over 50 per cent of the polling.
Posted by James Ferguson at 11:33 AM