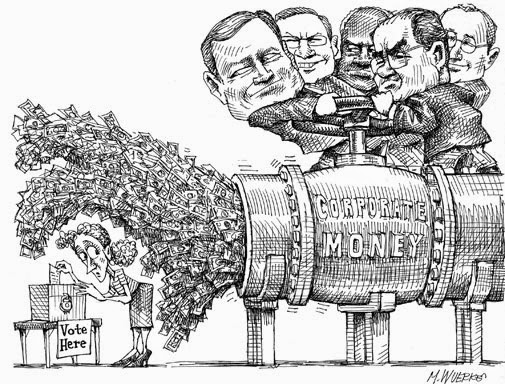 We saw the Senate "nuclear option" last year when Harry Reid wiped out Republicans' continued attempts to filibuster presidential nominations, which had held up an estimated 600 appointees over the last five years.  However, the GOP has long had its ace in the hole in Chief Justice Roberts, who joined his conservative justices in striking down the limit on campaign contributions, paving the way for money to once again flow freely in elections.

It's not like it really held back conservative campaign contributors.  Sheldon Adelson pumped an estimated $93 million into Republican campaigns in 2012, $30 million into Mitt Romney's campaign alone.  And, we all know about the tentacle reaches of the Koch Bros, who use PAC's like Americans for Prosperity to funnel money to a wide variety of campaigns, including their ongoing assault of "Obamacare."

The McCutcheon decision is particularly unsettling, as some states have had more stringent campaign finance rules in place, but now they have been null and voided.  The decision seems to go against all grass roots efforts, left and right.  It will also hurt the Tea Party, as the TP now finds itself outside the GOP loop, making it harder for it to run insurgency campaigns against establishment Republicans in the primaries, which they have been doing these past four years.

This all points to the bleak reality of Capital being consolidated in the hands of the few, at the expense of the many.  This is the subject of a new book by French economist Thomas Piketty, who sees this as the unfortunate consequence of a Democratic society that doesn't have the checks and balances in place to insure a relatively fair distribution of wealth.  He points to the period 1930-1975 as a time in which social-minded governments tried to manage capital.  However, since Reagan, Thatcher and Kohl in the 80s, we have seen a profound shift to the right, that has affected Europe as much as it has the United States.

At one time, prominent Republicans as well as Democrats recognized the need to control the amount of money flowing into political campaigns and issued sweeping campaign finance reforms, notably the Bipartisan Campaign Reform Act of 2002.  There were loopholes, to be sure, as big money still managed to creep into state and national elections, ballooning to a staggering $2 billion raised on the Presidential election alone in 2012, with virtually all of it spent.

This was also Big Money's first serious attempt in many decades to put a Big Money candidate in the White House, as Romney himself was worth a quarter billion dollars, if not more.  Kennedy was the last President to come from an extremely wealthy background. 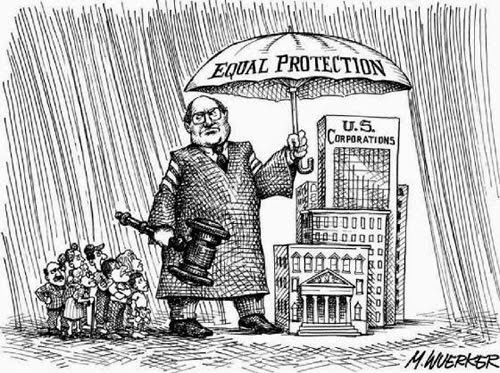 It seems voters generally tend to be repelled by such candidates, which is why Big Money often looks for a populist candidate to make its pitch.  Newt Gingrich was their man in the primaries in 2012, drawing big contributions from Sheldon Adelson, which briefly vaulted him to front runner status before his campaign imploded.  Not surprising that Newt supports this USSC decision.  He was a direct beneficiary of the 2010 Citizens United decision, which first opened the flood gates in 2012.  The amusing part is his claiming that it somehow "equalizes" the Middle Class and Rich.

I suppose this is because Obama effectively proved in both his 2008 and 2012 campaigns that you can amass a sizable "war chest" from small contributions if you can appeal to the people.  The Tea Party has also proven very effective in this regard.  It seems the GOP's only way to counteract these grass roots efforts is to remove the cap on campaign contributions, once again relying on the Supreme Court to bail them out.

Here is Justice Stephen Beyer's "blistering dissent" to the McCutcheon decision.
Posted by James Ferguson at 10:41 AM