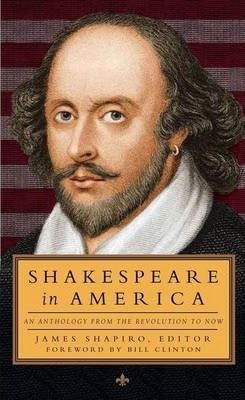 There was a time when Shakespeare was standard reading.  When I was clearing out my grandmother's storage bin a few years back I came across an 8-volume leather-bound edition of Shakespeare's complete plays for actors.  It dated from 1895.  Recently, I had the volumes restored, as a couple of the backs were broken.  An heirloom I can pass along if only my kids took as much interest in Shakespeare as I did.  Maybe in the future they will develop an appreciation for the bard.

Library of America has released its latest anthology, Shakespeare in America, which is loaded with anecdotes like Longstreet commenting on U.S. Grant's portrayal of Desdemona, while the troops were biding time during the Mexican War.  It seemed everyone was doing Shakespeare, as William Grimes notes in his NY Times review of the book.

Shakespeare had a profound influence on writers like Melville, who apparently rewrote Moby-Dick after reading Shakespeare for the first time, recasting his characters and giving it a much more fatalistic air.

Even in this day and age you can find Shakespeare reproductions on both the stage and movie screen, and the bard continues to be taught in schools, influencing a whole new generation whether they like it or not.  The language can be a bit daunting in this modern age, which is why you see so many adaptations that try to give this themes greater relevancy for today's youth by setting his plays in modern times.

Probably one of the most compelling adaptations I read as a kid was Frank Herbert's Dune, which reset MacBeth in the distant future on a dry desolate planet called Arrakis.  You might call it "Shakespeare in Space."
Posted by James Ferguson at 2:28 PM