In CIA we trust 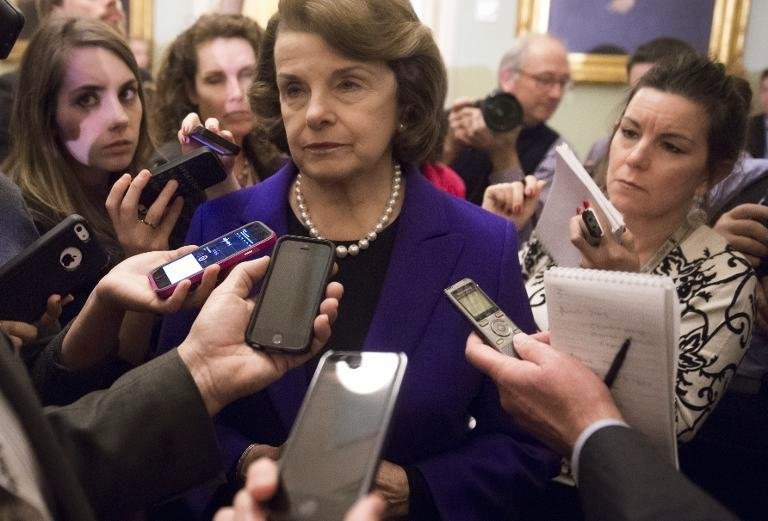 All good things come to an end -- waterboarding, rectal hydration, and most sadly The Colbert Report.  No one gets to the bottom of a story (in this case quite literally) better than Stephen Colbert, who skewers the media response to the release of the Senate Select Committee on Intelligence's Committee Study of the Central Intelligence Agency's Detention and Interrogation Progam.

Of course, Stephen mainly goes after Fox, who for whatever reason thinks this is all in the past and shouldn't be dredged up again, unlike Benghazi.   Colbert also nails Wolf Blitzer, who gave Diane Feinstein the third degree for the report's untimely airing, as if any future American deaths will be pinned directly on the release of this report.  I suppose Wolfie felt the need to say that, but as Colbert noted this is an all too often case of the media trying to cover up the story rather than exposing it.

These days, the mainstream media is more interested in setting its own narrative, and the report seemed to take them by surprise, as they haven't had a chance to read it and wrap their thoughts around it and shape it into a neo-Hollywood production.  So, they do the next best thing and make it into a reality show, allowing any Tom, Dick or Harry to come on the news show to criticize it without obviously having read it.

The report contains over 6000 pages of testimony and other information that has been collected over five years, including numerous interviews with the people directly involved in the grotesque incidents described.  It has been condensed to 525 pages for public consumption.  Dick Cheney would like us to think that these "enhanced interrogation" techniques resulted in valuable information being gained on terrorist activities.  Tom Blanton tells us that these were nothing more than Chinese communist torture techniques designed to get propaganda statements out of American detainees during the Korean War, which were dredged up by two psychologists who were paid $81 million for their efforts.  There is nothing in the report to indicate that the enhanced interrogation methods worked.

What is particularly scary about the CIA today is how much of its work is being outsourced, which was also covered in the report.  Not only does the CIA hire outside sources for consulting, but also to help interrogate alleged terrorists.  "Private contractors made up 85% of the workforce for detention and interrogation operations," making me wonder just how "clandestine" this organization now is with so many persons involved outside the agency.  Much of this information had already been leaked to the press over the years, including CIA "black sites" in Eastern Europe, which meant the CIA had managed to get other country officials involved in the interrogations as well.

Many Americans feel that the awful event of 911 justifies the methods used to attain information from suspected terrorists, even if many persons forced to submit to these interrogation methods were released because they had been "held in error," like Mr. Bashmillah who suffered through eight years of CIA custody.

The report is so damning that probably the only way to approach it is through comedy, as it is going to be very hard for many Americans to come to terms with it.  We still seem to believe that our institutions represent our interests, when in sad reality agencies like the CIA represent primarily corporate interests abroad.

That had long been the case dating back to the coup attempts in the 1950s, notably the successful coup of the democratically elected Iranian government in 1953, and the reinstatement of the Pahlavi Dynasty to secure unfettered access to Iranian oil fields. The CIA was finally forced to admit its role in this coup d'etat last year.

Rather than dealing with these ugly truths, we instead shower praises on the CIA with movies like Argo and television shows like Homeland, with former and current agents actively involved in the scripts, presumably to give the stories verisimilitude.  Argo was particularly amusing, as the premise for getting six Americans who had managed to slip out of the Iranian embassy during the takeover in late 1979 was to stage a phony Hollywood movie in Iran.

Homeland at least explores the moral ambiguity in the decisions being made in regard to our current involvement in the Middle East and Central Asia, humanizing the agency thanks to compelling performances by Claire Danes and Mandy Patinkin, which has made it a very popular show.  Ultimately, however, the decisions are seen as part of a "greater good," despite the consequences of the actions.

But, this is what Americans remember most.  For many, the end justifies the means in this ongoing "War on Terror" even if there appears to be no end in sight.  So, it is Diane Feinstein who comes under attack for daring to hold the CIA accountable, not the CIA itself.
Posted by James Ferguson at 10:22 AM