He did it his way 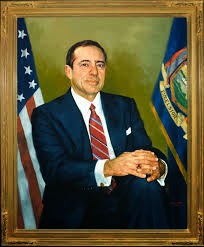 I remember listening to Mario Cuomo's keynote speech at the Democratic Convention in 1984 and wishing he was running for President and not Walter Mondale.  I was sure he would run in 1988 and again in 1992, but Cuomo ducked out both times.  My father felt he had too many skeletons in his closet, but it seems that Cuomo preferred Albany to Washington.

His tenure finally ran out in 1994 when he was upset by George Pataki in what proved to be a watershed year for Republicans.  George Bush similarly scored a surprise victory in Texas over the well-liked Ann Richards.  They both had a great sense of humor about it, but I have to think that loss hurt.  His once formidable political clout was gone and he was relegated to a periphery figure in American politics.

It was his good fortune to father a son who would restore his dynasty in New York, but it isn't the same. Andrew is not the great speechmaker his father was and he struggles to place himself at the center of national politics, which Mario was.

Mario Cuomo was that rare political animal, one who had an inner being.  He took time to read, to digest information and form intelligent opinions, not just play off emotions the way most politicians do.  It is hard to say whether he would have made a good president but the way he was able to balance rival political interests in New York should serve as a model for any executive.

It is hard to think of him as a liberal, as he adopted many Republican concerns like spending cuts and a balanced budget.  I remember a Village Voice article commenting on whether he was a "Closet Republican."  Somehow, he managed to keep just enough social programs intact to make liberals relatively content while convincing moderates he was fiscally responsible.  Call it "progressive pragmatism" if you like but it was a  recipe that earned him three terms as governor.

One can't really say he will be missed, as his political career ended 20 years ago and he kept a relatively low profile since then.  He returned to law and authored a handful of books including Why Lincoln Matters.  Given the outcome of the 1994 gubernatorial election, one can't help but think he missed his moment in 1992, when he could have very much won the Democratic nomination.  Just the same, Mario Cuomo will certainly be remembered.