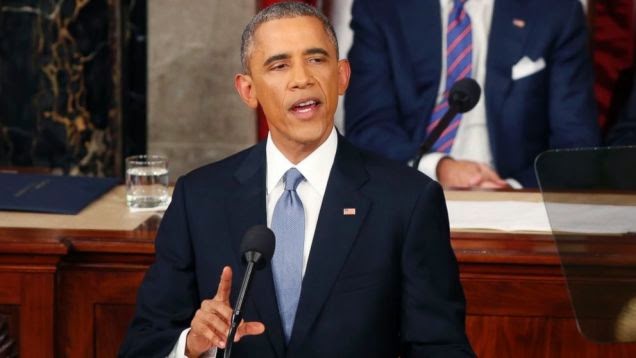 It seems the Republicans aren't the only ones reacting to President Obama's annual State of the Union Address.  Russian officials took exception to it as well.  Obama did mention the impact sanctions were having against Russia, as well as note how the Republican naysayers felt Putin had gotten the upper hand on him diplomatically.  However, the bulk of the speech was about American domestic policy, not foreign policy.

The President offered some very tempting proposals, notably covering the first two years of community college, echoing the GI Bill from 1944.  With so many Americans forced to make readjustments, he felt that the nation should follow in the steps of Tennessee and Chicago in covering initial academic costs.  He used Rebekah and Ben Erler of Minneapolis as his prototypical family forced to rethink their situation in the aftermath of the 2008 economic crisis, comparing America to "a strong, tight-knit family who has made it through some very, very hard times."

Obama has often used a selected American family as the base for his speeches on domestic policy, inviting them to Congress to hear his speech.  It helps to bring his points home, but not everyone identifies with his SOTU speeches.  This year's opposition voice was Joni Ernst, the incoming Senator from Iowa, who Republicans felt would resonate with their base.

She took a softer tone than past junior senators.  However, she responded less to the speech than she did the "mandate" she felt Republicans won in November.  She added quite a bit of personal history, telling us of her hardscrabble life in Iowa.  At least, she outshone Ted Cruz who went for a live response on Youtube that backfired terribly.

We are less than two weeks into the new Congressional session and the Republicans are still trying to shove the Keystone pipeline down our throats, despite historic low gas prices that further call into question the merits of such an endeavor.  Obama tried to encourage the Republicans to think large, and work with Democrats to improve American infrastructure as a whole, but it seems that the GOP is more indebted to its Super PACs than it is the American people.

The theme that resonated trough out Obama's SOTU address was that of "middle-class economics."  He clearly wants to expand opportunities for the working class by increasing minimum wage, providing sick and maternity leave, offering better health, education and welfare benefits, and easing their tax burden.  To do this he called for a tax increase on the rich and on capital gains, spread out over 10 years.  It is an ambition plan, but one not likely to gain much traction in Congress.  However, as John Cassidy notes, is sure to set the stage for the 2016 elections.

Obama knows all too well that the initiatives he outlined aren't likely to be heard by the Republican majority in Congress, but he went a long way in setting the narrative for the next election.  Something the Democrats have failed to do in the recent past.  In the meantime, he will continue to use his executive authority to carry out as much of his agenda as he can, to the chagrin of Republicans who now view him as an emperor-in-chief.

What struck me the most was the President's positive tone.  He looked more comfortable in front of an audience than he has done in years.  He even joked with his adversaries and got the last laugh.  You get the sense of a President running the last lap of a grueling race and seeing a way to end his administration on a high note.
Posted by James Ferguson at 6:12 PM