Honest Abe and the Press 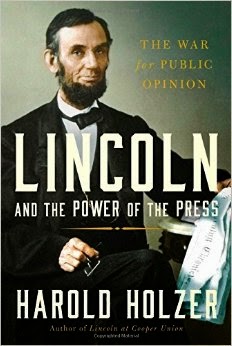 Manipulating the press is nothing new.  Harold Holzer illustrates that there were few better than "Honest Abe" Lincoln at playing the press for his own personal gain.   Of course, Holzer sees this in a positive light, as he is a big fan of Lincoln,  having previously dissected his famed Cooper Union address, which went a long way toward achieving his presidential ambitions.  In this book review, Garry Wills outlines Holzer's approach to his latest book, Lincoln and the Power of the Press.

At times, Lincoln's tactics were not so honest as when he created a fictional "Rebecca" to assail James Shields, a rising candidate in the Democratic party.  Lincoln was a young Whig at the time.  He and his law partner, William Herndon, often penned anonymous articles for Whig papers, promoting their political agenda, but these "scurrilous letters" almost cost him his life, as Shields challenged young Lincoln to a duel.  Fortunately for Lincoln, he was able to choose the weapons.  He picked broadswords as he towered over Shields, forcing his Democratic rival to withdraw his challenge.

According to Holzer, Lincoln's bid for the 1860 Republican nomination was well choreographed, starting with his challenge to Stephen Douglas in 1858.  Lincoln was thinking of the bigger picture here, determined to have the debates read by a broad national audience, which he succeeded in doing with the help of Horace Greeley and Henry Raymond.  The debates were published in New York as well as Chicago papers and gained widespread notoriety.  This in turn led to an invitation to speak at Cooper Union, which helped gain him a national audience.

Within a span of two years, having only served two years as US Representative from Illinois to Congress, Lincoln had catapulted himself into contention for the Republican nominee for President in 1860.  It was a young party and was looking for a fresh face to lead it after its weak showing in 1856.  Lincoln took the nomination on the third ballot, overcoming favorites William Seward, Salmon Chase, and Simon Cameron.  He had Horace Greeley and other influential newspaper editors to thank for spreading his name among delegates.

In the White House, Lincoln continued to manipulate the press to outflank his rivals, including  George McClellan, the disgruntled Union general who would run against him in 1864.  Holzer marvels at the way Lincoln used the press as a bully pulpit, which deeply influenced later Presidents like Theodore Roosevelt.  Lincoln also found ways to suppress "rebel papers" through his generals, to limit the amount of press coming out of the South.