We Will Not Obey! 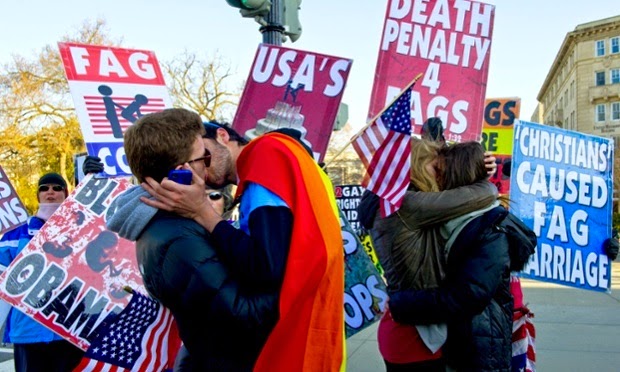 So say Christian leaders, who among other things are asking Justices Ginsburg and Kagan to recuse themselves from the final vote on the case to legalize same-sex marriage across the country.  Of course, such brashness has come to be expected from the religious right, who created this situation by pressing for these State Restoration of Religious Freedom Acts across the country.

The funny part is that these religious conservatives regard Justice Ginsburg as biased because she spoke out on the case.  Has Justice Scalia been any less outspoken?  Should he recuse himself as well?

It has been a very raucous proceeding, with most of the justices speaking out at one point or another.  It is pretty clear that Justices Scalia, Alito and Thomas have made up their minds, just as have Kagan and Ginsburg.  This leaves the balance in the hands of Sotomayor, Beyer, Roberts and Kennedy.  I'm guessing the vote abolishing gay marriage bans goes 6-3 with the religious right clamoring for the recall of Roberts and Kennedy.

Sadly, it is the ugly battle we have come to expect on civil rights issues.   Our nation remains as deeply divided as ever.  It has always struggled to accept change, especially what it regards to be religious moral values.  You'd be hard pressed to find any direct reference to homosexuality in the Bible.  One diligent reader managed to find eight references in the Old Testament, most of them oblique, but none in the New Testament.  For many on the religious right, the Old Testament trumps the New Testament. True of the Vatican as well, which hasn't brought itself to see homosexuality as appropriate sexual behavior.  However, Pope Francis famously said, "Who am I to judge them?" forcing religious conservatives to do a lot of hand wringing.

The religious right would have us believe that by accepting gay marriage we will bring God's wrath down upon us, as he did Sodom and Gomorrah.  They see themselves as the messengers of God, who were sexually assaulted by the evil men of Sodom, not stopping to think that they are the ones doing all the bullying here.

This is what Pope Francis emphatically spoke out against.  Not like hard-line Catholics Scalia and Alito are paying any attention.  They have effectively used the Supreme Court as a bully pulpit for expressing their own religious convictions.  Scalia was particularly upset when the Supreme Court voted not to delay same-sex marriage in Alabama over state protests.  He joined Clarence Thomas in a blistering dissent of this ruling.

Whether state pastors, politicians and pizza vendors choose to abide by the decision or not, states will no longer be able to explicitly ban gay marriage or discriminate against same-sex married couples.  After all, the US Constitution, which these Supreme Court justices swore to uphold, is about individual rights, not what some regard to be the word of God.
Posted by James Ferguson at 1:58 PM