In the Aftermath of Umpqua 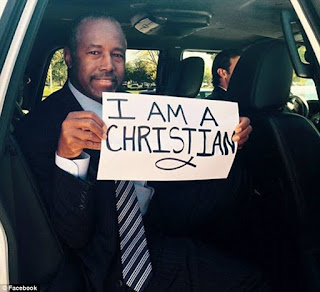 Some pretty bold pronouncements coming out of Dr. Ben's mouth after the latest mass shooting at Umpqua Community College.  The good doctor claims that if he had been there he would have led the students against the shooter, "that way we don't all wind up dead."  Fortunately, that was not the case.  Many survived, even Chris Mintz, who did charge the shooter and took a number of shots in return.  Chris is being credited for helping to keep the death toll down, but the way Carson tells it he could have done better.

The good doctor has taken quite a bit of flak for this statement.  It might be in his best interest to walk it back a little.  Instead, Carson went even further to say that the Holocaust would have never been perpetrated if Jews had more guns.  Of course, it is not the first time this has been said, but one would like to think that a pediatric neurosurgeon would be a little more sensitive, not only to those suffering through that horrible tragedy at Umpqua but to those who suffered through the unspeakable tragedy of the Holocaust.  Instead, Dr. Ben says he had to deal with bullet holes in bodies, and believes it is much worse to take away our second amendment rights.

Well, this type of talk may play well among the base of the GOP, who look at the victims of these shootings as "sheeple," accepting their docile fates rather than fighting back as of course they would all do if put in a similar situation.  Ben even tells us a story of how he averted a gunman at a Popeye's restaurant by directing him to "the guy behind the counter."  Sounds rather cowardly for a man who previously said he would lead the charge against the gunman, but I guess the good doctor felt there wasn't enough wiggle room for him to make a dash at the guy, presuming it was even a gun pressed against his ribs.

Most of the other GOP candidates have kept mum on the subject or blamed these shootings on not properly diagnosing mental illness, which John Oliver took offense to in a recent episode of Last Week Tonight.  It's a cop out for Republican leaders who don't want to address the gun issue, largely because they don't want to offend the NRA and their gun-toting electorate.

If we look at gun violence on a broader plane, these mass shootings are rare in comparison to the 33,000 gun-related deaths per year in America.  Not that it makes these mass shooting any easier to accept.  However, the vast majority of gun-related deaths are self-inflicted or the result of domestic violence, which would indicate that if you have a firearm in your house, you are more likely to shoot yourself or be shot by a spouse or other family member than you are to be shot by someone breaking into your home, much less in a public space.  Yet, the NRA strongly advocates that everyone should have a gun for self-protection.

These gun rights activists go even further by pushing for laws in states that would allow anyone to have a gun on campus.  Thirty-one states, including Oregon, allow persons to carry concealed weapons on campus provided they have a special permit.  Starting next year, Texas will allow persons to openly carry weapons on campus, and I'm sure other states will follow.  But, if we look at the alarming rate of personal gun-related deaths this does not ensure safety but quite the opposite.  It would essentially extend the sphere in which one with a gun could inflict harm on himself or those close to him, as all it would take is a violent domestic argument to tip someone over the edge.

Jon Stewart also pointed out sometime back that these open-carry laws come in direct conflict with "Stand Your Ground" laws, in which it is enough to feel threatened to resort to violence.  What happens when a guy with a Walther PPK feels threatened by a guy with a Bushmaster AR-15?  This pretty much takes us back to the days of Wild Bill Hickock and Calamity Jane.

Unfortunately, very few persons make the effort to think these situations out.  Instead, you hear them respond emotionally to these incidents, often getting on a high horse for political gain.  Apparently, Dr. Ben considers himself invincible, given his strong faith.  He probably would have been wise to keep his response to the photo of himself proudly proclaiming "I Am A Christian," rather than venture into that gray area of what you would do if your faith was actually tested in this horrible way.  I think even Jesus would have probably said it is best to keep your faith to yourself rather than risk your life over it, as religious faith isn't going to stop a bullet.  Good advice to politicians as well.