The salute seen around the world 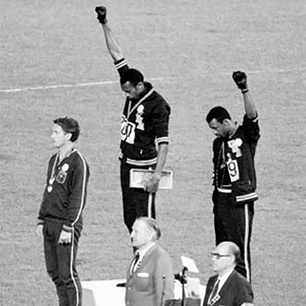 This photo still resonates 47 years later, especially given all the attention Black Lives Matter has been getting in the news media and among the presidential candidates.  Tommie Smith and John Carlos stood barefoot and held their black-gloved fists high in a Black Power salute that sent shockwaves around in the United States and around the world.  How dare these two men "politicize" the Olympics, echoed all the leading newspapers and television news programs of the time.  I guess it is one thing for countries to politicize the games, but another when individual athletes do.

However, lost in this story is is the Australian guy on the podium with the two American athletes.  That was until a documentary was made of Peter Norman, who actually finished second in that 200 meter race behind Tommie Smith who set a new world record.  Norman's time still stands as the national record in Australia.

The 1968 Olympics were already marred by violence in Mexico City, when the government brutally repressed a student uprising two weeks earlier.   A young Czech gymnast defied the Soviet flag being raised during her medal ceremony, in response to the brutal oppression by Soviet authorities of the Prague Spring earlier that year and the controversial judges' decision that led to her having to share a gold medal with a Soviet athlete.  Of course, the American media lauded this protest.

It turns out Peter Norman wasn't just an innocent bystander, but actually asked Smith and Carlos if they had a black glove for him, as he supported their cause and continued to do so throughout his life.  In Norman's case it was about human rights as a whole.  He was against the harsh Australian immigration policies and the way Australia treated the aborigines in his home country and let it be known.  However, it was his outspoken support for Smith and Carlos that earned him the ire of the Australian Olympic committee, which banned him from any succeeding games.  He was the fastest Australian in 1972 as well, but wasn't allowed to attend the Munich Games, which became politicized in a much more tragic way.

Norman suffered abuses from his countrymen for many years.  Even in 2000, when Australia hosted the Olympics, he was offered a spot on the Olympic committee provided he recant his support for Smith and Carlos.  Norman refused again.  It was only in 2012, after his death, that the Australian parliament finally issued an apology to Peter Norman and recognized his great achievements, six years too late. Smith and Carlos had maintained contact with Norman over the years, and had flown to Australia to serve as pallbearers at his funeral in 2006.  They had great respect for their follow athlete, who had stood alone against Australian authorities and most of his countrymen, whereas they had both found support at home.

Athletes are often easy targets for our ire.   News coverage of Smith and Carlos' tribute overshadowed all events, and made Peter Norman a pariah in his home country for supporting their salute.  It is great to see Norman finally getting his due, even if it comes many years too late.