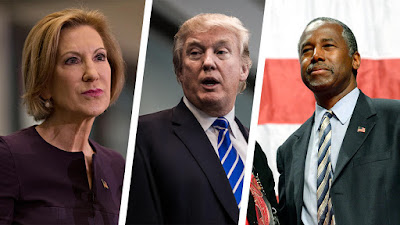 One can well understand the Republicans' desire for fresh new leadership but resting it in the hands of Donald Trump, Ben Carson or Carly Fiorina, three of the top four polling candidates,  really makes you wonder what is going on here.  None of them have ever held an elected office in their life, never worked with the government except on a "transactional" basis and have no foreign policy experience, unless you count Trump and Fiorina's business deals with Chinese and Iranis.  This is like throwing away your whole hand at the poker table and hoping for a pair of aces in return.

A recent poll shows that 66 per cent of Republicans want new leadership in Washington.  This would have made it a governor's year to run for the White House, as voters typically turn to the state level in these situations.  Jeb Bush and Scott Walker did well early, but have since plummeted in the polls.  Walker dropped out of the race all together.  Jeb leads the seven remaining governors with a miserable 4 per cent of polling audiences, well behind the political neophytes.

Granted, the host of governors aren't the most appealing lot.  Chris Christie is dogged with a sordid trail of misconduct and a lousy economic record in New Jersey.  Scott Walker's anti-union policies in Wisconsin may have endeared him to Republicans early, but he failed to build on it during his short campaign. Bobby Jindal has made Louisiana into an even worse basket case than it already was.  Rick Perry's great economic miracle in Texas went the way of the price of a barrel of oil.  Still, that leaves five other governors.  Well two really -- Jeb Bush and John Kasich, both of whom had/have respectable records at Florida and Ohio, which are tremendously important states in the general election.  Mike Huckabee is running more on his religious faith than he is his record as former Governor of Arkansas.  Jim Gilmore and George Pataki, the former governors of Virginia and New York, have yet to even register on most polls.

Any reasonable person would value governors from Ohio and Florida.  Both have solid conservative credentials.  Jeb was the first to actively promote and put in place an education voucher system, which was widely hailed by Republicans at one time.  Kasich seems to have found the right balance of populist governing in Ohio, enjoying a very high approval rating in his home state.  So, what gives?

It seems that many Republicans were first seduced by Donald J. Trump, and now find themselves flirting with Carly Fiorina, believing that what the party needs is a strong shot of corporate style business management, despite the dubious records of these two.  Another substantial group has flocked toward the divine neurosurgeon Ben Carson, whose strongly espoused faith and remarkable skills as a pediatric brain surgeon has made him a favorite among Evangelical voters.  They all seem like very odd choices given this was supposed to be the best Republican field of candidates since the 1980 primaries when Reagan was mildly challenged by George H.W. Bush and John Anderson. 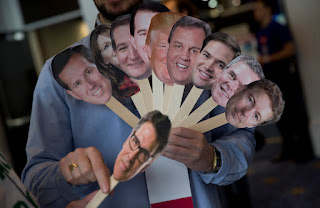 Part of the problem has been too many candidates.  Seven or eight would have been enough to foster diversity and choice.  Instead, the Republicans ended up with 12 candidates before Trump's now famous escalator ride in June, with four more candidates declaring themselves shortly afterward.  The Human Hair Piece made it easy for Republican voters, particularly the Tea Party base, by putting their interests front and center with no sugar coating.  Chris Christie had hoped to appeal to voters on the same guttural level, adopting the slogan, Telling It Like It Is!" but the Donald had beaten him to the punch.

Trump seized on immigration, offering a "zero tolerance" approach that would result in mass deportations and a wall built along the border of Mexico.  Governors Jeb and Rick initially scoffed at the idea, but Trump's stern message immediately took hold of the Republican electorate's imagination, and he doubled down by demanding "birthright" citizenship be eliminated, part of the 14th amendment to the Constitution, which was ratified in 1868.  Who could compete with that audacity?

As much as the Republican governors and Congressional representatives tried to argue that it wouldn't work, Trump soared in the polls and at one point found himself so far ahead of the field, it looked like he was going to run away with the nomination.  Trump even boldly asserted why do we need these primaries, when it is so clear everybody loves him, even Democrats.  Where arguments failed, bluster won, and soon the other candidates were desperately trying to match bluster for bluster, seeing who could make the most outrageous claims.  Scott Walker undid his campaign when he boldly suggested that a wall along the Mexican border wasn't enough and that we should consider one along the border with Canada as well. 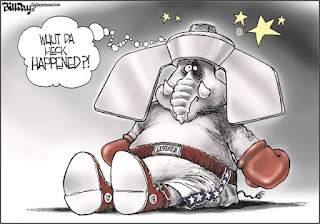 Basically, the Republicans lost their heads.  They were so completely seduced by Trump's unabashed views that the only antidote was a soft-spoken doctor who preached faith and unity.  You might call Ben Carson the Prozac candidate, calming a political party that was on the verge of a nervous breakdown. Trump may have given this election cycle badly needed vitality, but it came with a lot of nasty side effects, notably alienated Hispanic, Asian and women voters, all considered essential for a Republican victory next November.

Even at his peak, Trump garnered no more than 35 per cent of the GOP electorate in the polls.  He had driven a huge wedge in the party but he hadn't run away with the nomination, which he bragged he had.  Perry and Walker both left the campaign, saying that the other candidates had to coalesce around one anti-Trump candidate, but I doubt they expected it to be Ben Carson, who is now polling ahead of Trump in at least one poll, where Trump has fallen to 17 per cent.  Carson was a virtual nobody in the political world until he called out President Obama at a National Prayer Breakfast in 2013.

As a result, no one else is leaving just yet, not even George Pataki, who has decided to cast himself as the "moderate" candidate, promoting the need to address climate change, a more open-minded immigration policy and a woman's right to choose in the face of overwhelming odds in the GOP primaries.  Even Jeb Bush still holds out hope that the primaries will swing his way in the long run, as his campaign is "built to last."  Great sentiments but there is little to suggest it will pan out this way for him. 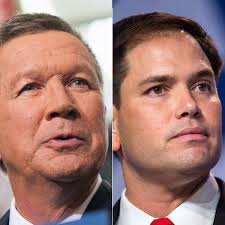 If we look at this in a pragmatic way, the best option for the Republicans next November would be John Kasich.  Given his high approval rating in Ohio, he would most likely swing the state back into the GOP column.  If you were to add Marco Rubio as Vice-President to the ticket, who is currently polling well among Republicans, you have the very likelihood of adding Florida to boot  This would be a huge electoral triumph and make it very difficult for the Democrats to keep the White House.

Instead, we see Republicans still flirting with Trump, Carson and Fiorina, who are nothing more than vanity candidates, seemingly determined to overturn the party establishment, like what happened in the House of Representatives where John Boehner was forced to resign.  This is a very slippery slope that Republicans have taken, calling into to question all the tenants they ran past political campaigns on, like scolding a young Barack Obama for being too inexperienced to be President in 2008, and now saying that his inexperience is what "ruined" our country.

Well, I for one don't believe in a United States of Trump, or Carson or Fiorina for that matter.  Legislative experience does matter, and none of these candidates have any.  Trump and Fiorina have deeply flawed business records and Carson has never had to manage anything other than his 401(k) retirement plan.  Hardly the type of leadership that would normally inspire confidence, but this isn't a normal year for Republicans. 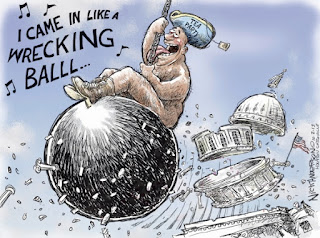 The GOP is in shambles with the most dominant figure being Donald J. Trump.  He is the only one projecting any confidence, as false as it may be.  However, this is an electorate that has fallen prey to a reactionary ideology fomented by Fox News and incendiary websites that basically call for an end to government as we know it, giving us "folk heroes" like Cliven Bundy and Kim Davis, who openly defy the federal government.  Anarchy at its worst.

In this brave new world no experience is needed.  In fact, the less experience the better so as not to get in the way of some of these absurd claims being put forward by the leading Republican candidates.  It's not just the federal government, but every aspect of society these candidates are questioning, including vaccines.  One can only hope that reason will eventually prevail.