Keep your feet on the ground 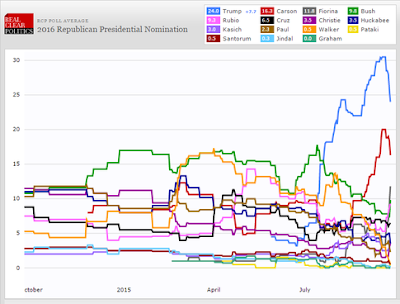 To provide some badly needed perspective on presidential polling, you need to slide your mouse over this RCP graph of the 2012 GOP Presidential Nomination that ranges from April 2011 to April 2012. You will see that the major fluctuation in preferences occurred between Aug. 22, 2011 to February 22, 2012, with no less than five candidates leading the national polls at one time or another.   At various points, Perry and Gingrich had double-digit leads over Romney, who managed to stay in second place throughout the nomination process because he was the only "establishment" candidate in the bunch.  The rest were insurgent candidates, with the exception of Jon Huntsman who stayed at the bottom of the polling until he dropped out after the New Hampshire primary.

This year is shaping up to be pretty much a repeat, although the fluctuations took place sooner, starting in March, when Walker gave up the lead to Bush, who held it until Trump soared to the top of the polls in July, and now finds himself being challenged in October with his average differential slipping to 5 points over Ben Carson.  At the peak of his popularity on September 16, Trump held a 10-point lead over Carson.  The one surprising difference is that Bush has slipped all the way down to fifth place with an aggregate of 8.3 per cent.  At his lowest point on Aug. 31, 2011, Romney still enjoyed 16.5 per cent of the GOP polling electorate.

Jeb Bush faces a number of problems that Mitt Romney didn't have to face.  Jeb not only has to deal with a number of insurgent candidates, but also with well-established candidates, who are siphoning away his votes.  Currently, Rubio has a 9.5 aggregate, Kasich 3.1 and Christie 2.6.  If Jeb was the only "moderate" in the race, as Romney was in 2011, these polling numbers would probably swing in his favor and he would be right up there with Trump at approximately 22.5 per cent.  But, Bush faces another problem in that voters are less likely to coalesce around him because of Bush fatigue than they are Marco Rubio or John Kasich or even Chris Christie, all considered viable candidates in the general election.

In 2012, polls continued to fluctuate wildly through the early caucuses and primaries until Super Tuesday on March 6.  It was at this point that Mitt's war chest proved too much for the insurgent campaigns of Gingrich and Santorum, and Romney took the lead for good.  The winner-take-all format in many primaries greatly aided him, as he didn't even have to win 50 per cent of the popular vote to take all the delegates.

This time around, the winner-take-all rule only applies to primaries held on and after March 15, so that candidates will be able to scramble for delegates in 23 primaries and caucuses spread throughout the country before that date.  The kicker is that the Florida and Ohio primaries are on March 15, followed closely by Illinois and New York, which will be huge prizes for one candidate, and no doubt tilt the candidate who wins these states over the top, assuming the race is still close at that point.

One of the problems that insurgent candidates like Trump, Fiorina and Carson face is that they have been riding high poll numbers but don't necessarily understand the mechanics of caucus states like Iowa, Nevada and five other early states.  Trump and Fiorina don't appear to have much organization on the ground, which is necessary to do well in these states.  The more savvy candidate(s) will win these states, which offer a significant number of delegates.

Judging from this interview with Chris Cuomo, Trump thinks its enough to be riding high in the polls to do well in the primaries and caucuses.   Nate Silver warns against this type of thinking, recalling the lesson Hillary learned in 2008, among other past presidential candidates.  She ended up losing to Obama because his campaign well understood the mechanics and importance of caucus states and took every one, much to Hillary's chagrin, whose campaign staff thought they would put Obama away for good on Super Tuesday.  The Donald has mastered Twitter and Instagram, but it will take much more than that to pull off the nomination.

The only one of the three insurgent candidates to have mounted a political campaign before is Carly Fiorina, who tried to unseat Barbara Boxer in 2010.  Carly didn't fair very well in that California Senate election, relying mostly on brand appeal and negative campaigning.  Sound familiar?

As Nate says, there are too many variables to take the national polls seriously, especially at this stage of the nomination process.  Trump likes to talk a good show but so far that's all it is.  He is very much reminiscent of Herman Cain, who also talked a good show until Newt Gingrich knocked him down a peg or two in the so-called "Lincoln-Douglas style" debate.  That was pretty much the end of the Hermanator.

All is not lost for Jeb, Kasich or even Chris Christie.  You have to think one of these governors will eventually emerge from the pack to challenge the insurgent candidate du jour.  They each know how these state elections are run, and they have well seasoned campaign staffs to get the job done.  So far, however, they appear to be canceling each other out.

There is also Marco Rubio, who has had a bit of rollercoaster ride so far, but is climbing up the polls once again.  He seems to be one of the few candidates able to withstand the barbs flung by the Donald, including the Trumpster's latest prank of sending bottled water to Rubio, hoping to evoke Marco's dry-lipped rebuttal to President Obama's 2013 State of the Union address.  Marco has since learned to roll with the punches.

I'm sure we will see more shake-ups in the months ahead.  Here is the 2016 primary schedule.  It's going to be a long grueling ride.  We probably won't get a clear leader until sometime in March.   As Casey Kasem would say, "Keep your feet on the ground and keep reaching for the stars."
Posted by James Ferguson at 3:06 PM